Thousands of football fans have signed a regional daily’s petition calling on their club’s manager to stay with the team.

The Chronicle, Newcastle, has launched a fresh campaign calling for Newcastle United to retain the services of Rafael Benitez before his contract expires on 30 June.

The Chronicle has previously run editorials and campaigns in favour of Mr Benitez, who took charge of United in 2016, along with several front page pleas to club owner Mike Ashley in recent years following a perceived lack of investment in players and infrastructure.

The Chronicle splashed on its renewed campaign on Wednesday, and more than 9,000 supporters had signed its petition as of yesterday afternoon. 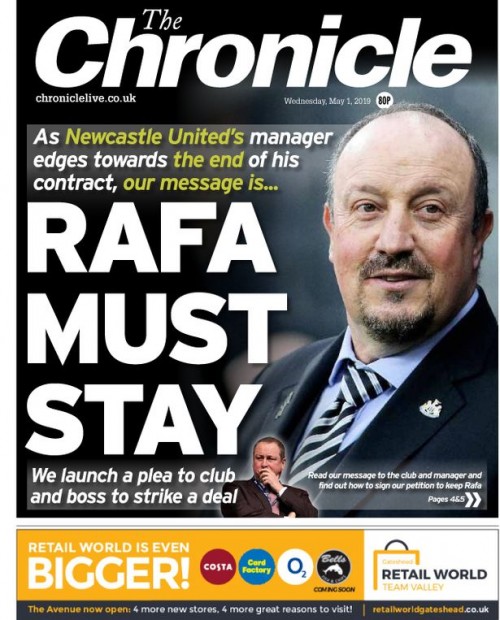 In an editorial explaining why the petition has been launched, Chronicle Newcastle United editor Mark Douglas wrote: “For Mike Ashley, Benitez may sometimes feel like hard work. No manager has questioned or agitated as he has, and perhaps he needs to start managing up a little better.

“But coming to an agreement with him is also the easiest way to prevent the problems of mistrust and discontent that have dogged his ownership.

“That is what a new contract for Benitez will bring: unity. The alternative would be ugly and messy. It does not bear thinking about. This is the house that Rafa has built – and that’s why it is imperative that he stays at Newcastle.”

“These are complicated talks. Benitez’s reputation is for pushing clubs to do more, and offer more, so that he can improve his teams. He is, we have to admit, a man who demands a lot – from his players, his pay masters and his public. But what is the alternative? If Benitez walks, the club risk fresh discontent on Tyneside.

Mark added: “Many fans are threatening to walk away from the club and, given some of Newcastle’s best players have implored the club to keep him, it would undoubtedly create uncertainty in the dressing room too. Players want be eyeing their next move while the next manager will always be compared to Benitez.

“That is why The Chronicle is today calling on the two parties to accelerate talks and do whatever they can to make sure this golden opportunity isn’t missed.”