Daily columnist bows out after 40 years amid newsroom cutbacks 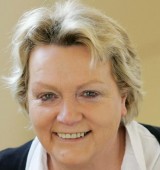 A regional daily columnist has been axed as a cost-cutting measure after 40 years of working for the newspaper.

Sharon Griffiths has written 1,400 columns for the Northern Echo since starting her ‘Mum at Large’ column 27 years ago, but it is understood she has been let go as part of cutbacks by the Darlington-based title.

Sharon, pictured, began as a staffer at the Echo in the 1970s and continued to freelance for them after leaving to start a family – writing consumer and money columns before starting ‘Mum at Large’.

She signed off with a farewell piece this week in which she recalled one reader accusing her writing “a lot of tripe” after meeting her in Sainsbury’s.

“I’d write about anything – big stuff, little stuff – but just wanted to make it interesting. There were quite a few awards along the way but the best bit – honestly – was being greeted like an old friend by total strangers, who actually remembered stuff I’d written and still kept cuttings.

“That was great, though it sometimes made it difficult to get the shopping done. As was/were the scores of messages I’ve received since the last column. Quite a few from regular correspondents, of course, but many more who’ve been quietly reading the column for decades. Wonderful.

“It wasn’t my decision to give up the Northern Echo column.  I was sacked.  Hey ho. These are hard times.”

Sharon continues to write a column for the Eastern Daily Press while her husband and fellow columnist, Mike Amos, is now in his 53rd year of writing for the Echo.

In her farewell Echo column, she wrote: “It’s been a great privilege and good fun, give or take the occasional abuse and threat of legal action.

“The best bit has been getting to know readers, so many lovely people… though not perhaps the one who came up to me in the middle of Sainsbury’s once and said ‘You don’t half write a lot of tripe.’ Ah well, You can’t please them all.”

Among those to pay tribute to Sharon has been former Echo editor Peter Barron, who tweeted: “Thanks for the fun, the common sense and for enriching the paper, Sharon. You will be missed.”