A huge survey of more than 200,000 voters compiled by a group of regional news websites has found a majority of people want to stay in the EU single market.

The ‘Big Brexit Survey’ gathered responses from 216,787 voters on Britain’s future relationship with the EU, using a network of local and regional websites owned by Johnston Press, Trinity Mirror and Newsquest.

A total of 258 sites took part in the survey, reaching readers from all corners of the UK.

It found that while 56pc of people believed Britain would be better off staying in the European single market, few would actually change their vote if a second referendum on EU membership were to be held.

The surveys took answers solely from people who said they voted in the 2016 referendum and were limited to one response per user ID.

Overall 56pc said the UK would benefit from maintaining current arrangements, meaning frictionless trade and free movement of people across the continent.

But conversely, 88pc of readers also said they would not change their vote if another referendum was held.

The survey results provided a splash for JP-owned national daily the i this morning.

HTFP has approached Johnston Press, Newsquest and Trinity Mirror for further comment on the survey. 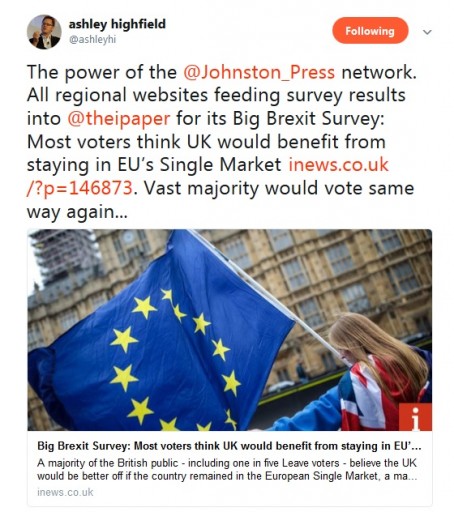