A police force says it is unable to confirm that armed officers arrested a publisher over suspected “hate crimes” – despite his own newspaper covering it on its front page.

Danny Lockwood, publisher of Dewsbury weekly The Press, splashed on his own arrest in Friday’s edition after being stopped by police as he drove to work last Monday.

According to The Press, he was then questioned about three hate crimes at Dewsbury MP Paula Sherriff’s office, which are thought to involve swastikas being deposited at her doorstep.

Danny has denied any involvement in the alleged incidents, while Ms Sherriff has publicly stated she has “no reason” to suspect he was involved. 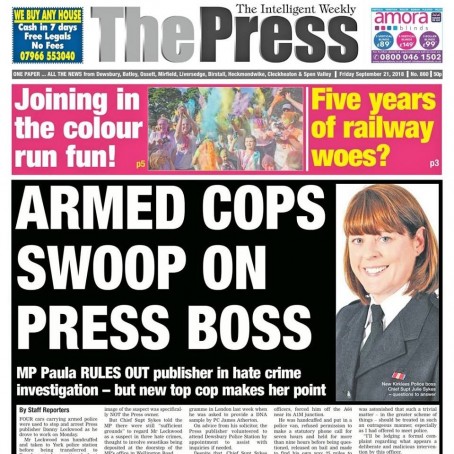 The Press splashed on Danny’s arrest on Friday

However, despite The Press running the story and Ms Sherriff issuing a statement mentioning Danny’s arrest, West Yorkshire Police said it “would not confirm or deny the identity of someone who may or may not be subject to investigation” when approached by HTFP.

A spokesman for the force cited national guidelines set out by the College of Policing for the policy.

The three alleged incidents took place in July and August, and prior to his arrest Danny had, on the advice of his solicitor, volunteered to attend Dewsbury Police Station by appointment to assist with inquiries if needed.

In the story, Danny claimed that despite agreeing to the appointment, he was stopped in his car, handcuffed, put in a police van, refused permission to make a statutory phone call for seven hours and held for more than nine hours before being questioned and released on bail.

The Press claims he was also threatened by PC James Atherton regarding writing or publishing anything about the case.

Danny told The Press: “I told him where to shove that. My solicitor was astonished that such a trivial matter – in the greater scheme of things – should be treated in such an outrageous manner, especially as I had offered to meet police.

“I’ll be lodging a formal complaint regarding what appears a deliberate and malicious intervention by this officer. My conscience is completely clear but what bothers me is that [Kirklees Police commander Chief Supt] Julie Sykes thinks she can get away with doing this to innocent people.

“Not to put too fine a point on things, but I’m reasonably well known around Dewsbury. And Sykes thinks I’d jeopardise my career and reputation by doing something as stupid as that? To an MP who writes a column for my newspaper? Using racist paraphernalia of a sort that I have always, totally and unconditionally condemned? What planet is this idiot officer on?”

He added: “I howled laughing when the rather sheepish PC Atherton showed me the CCTV picture of the suspect. He looked nine months pregnant and had a thick white growth of hair. But then to discover Sykes insisted there were other grounds to suspect me? What are those grounds and why wasn’t I told about those when arrested?

“Here’s the thing – if the police had given us that CCTV image to publish in The Press, they’d have had their man in minutes, because it is that clear and recognisable.”

In a statement, Ms Sherriff told The Press: “The police are currently investigating a series of incidents at my Dewsbury office but we have no reason to believe Danny Lockwood has been involved. When West Yorkshire Police suggested Mr Lockwood’s DNA was being sought as part of the investigation, that was our unequivocal advice.

“I’m frankly shocked at reports that an arrest was made by armed police. It’s an alarming step to have taken based on no legitimate line of investigation that I or my staff are aware of and I have raised my serious concerns about this with the police.”

Danny, who remains on police bail until October, has declined to comment further.