Newspaper goes red for one week after death of ‘local legend’

A weekly newspaper turned its masthead red for one week only in memory of a “local legend” of its patch after he died.

The Kingston Comet paid tribute to Moses Jon N’Kanar, who was a well-known character in Kingston upon Thames.

As a result, the Comet decided to turn its masthead red last week in honour of Mr N’Kanar’s favourite colour. 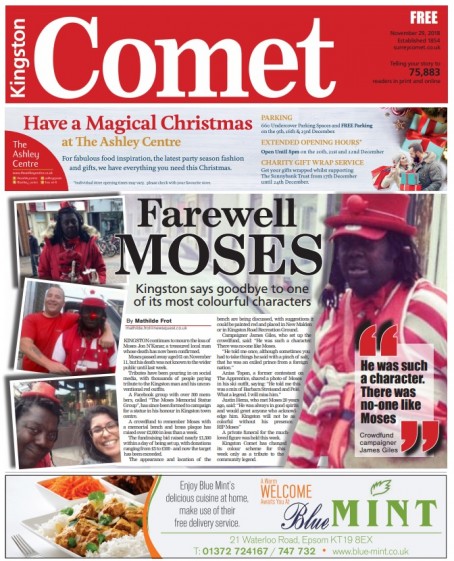 In a piece explaining its tribute, the Comet said: “Moses was always a recognisable sight around town and people from all over Kingston no doubt had their own personal anecdotes about conversations and encounters they had with him.

“But it is perhaps only since he sadly passed away on 11 November, that it became truly clear how much he meant to many of the people of Kingston.

“Since news was first confirmed of his passing, thousands have paid tribute online and have grouped together to brainstorm a variety of different ways our town can remember him.

“From a crowdfunded bench in his honour, to suggestions of a statue being placed in the town dedicated to him, the reaction to his passing has been tangible.

“Therefore, for this week only, Kingston Comet has changed its masthead away from its usual blue and green colour scheme, to a bold red colour – above a tribute to the man himself.”

The Kimgston Comet was recently launched as a dedicated edition of the Surrey Comet as part of a rebrand of Newsquest’s Surrey and South West London titles.