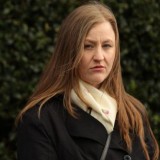 A Sunday newspaper’s news editor has left her role after three months to “get some proper rest” after what she described “some very difficult years”.

Angela Haggerty has quit her full-time post at the Newsquest-owned Sunday Herald, but will continue to write columns for the Glasgow-based title and its sister daily The Herald.

Angela was hired as news editor by the Herald despite previously having her column terminated by the paper in 2016.

Angela was told her column had been ended after she voiced support for sportswriter Graham Spiers, who had questioned whether Rangers Football Club was doing enough to tackle offensive chanting among its supporters and claimed an un-named club director had praised a sectarian chant.

The Herald maintained at the time it had “no option” but to apologise to the club, saying Graham’s assertions could not have been defended in court.

Posting about her decision to lave the news editor post, Angela wrote on Twitter: “Thanks all for such lovely messages today.

“Yes, I’m taking a break from the full-time intensity of the industry to get a proper rest after some very difficult years, but I’m carrying on my columns in the papers/telly and radio stuff, because I’m a stubborn old b****r.”

HTFP has approached both Angela and Newsquest for a comment.