A local news magazine is closing after almost five years in print because it is “too short of both love and money” to survive.

The Croydon Citizen has announced it is ceasing publication, saying it is unable to generate enough advertising revenue to keep the publication going.

Founded as an online-only venture in 2012, the Citizen has also existed as a monthly print magazine since December 2013. 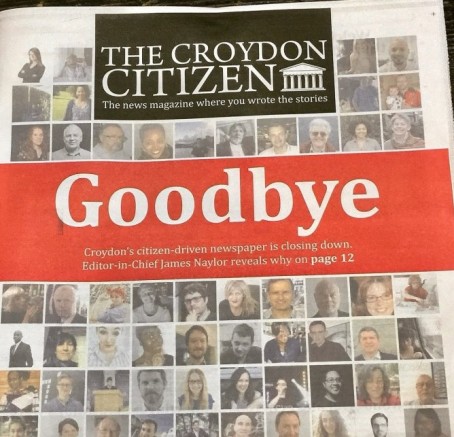 In a farewell editorial, editor-in-chief James Naylor said the Citizen had “always run on two fuels: love and money”.

Wrote James: “Like any volunteer-driven project, the ratio of love to money is very high. For several of us, love is the only fuel that we put in: I have never been paid by the project, never will, and never expected to be.

“The only successful businesses that outlive their founders’ involvement are those that primarily run on money, because it is the only thing that can be relied upon indefinitely. There is always someone who needs the money; not always someone who will do it out of love.”

James went on to state that the Citizen was “simply too short of both love and money to survive now”.

He added: “After working away to make it a success every week for five years of our lives, several of us old guard decided that the time was right to move on. I can’t speak for everyone, but I had long since been personally ready to leave to pursue other ventures.

“But the Citizen was so desperately important to us, none of us was prepared to see it go merely because our passions had waned.

“Moved by our belief in its importance and a sense of duty to Croydon, we wanted to build something sustainable. So we spent eighteen months trying to put measures in place that meant we could secure enough money into the engine’s mix that the love walking out the door wouldn’t matter.

“But, as with so much of media, there isn’t enough money for it to make up the difference. We have never been able to consistently plug that gap with advertising revenue.

“Our supporter programme has been hugely successful in allowing our readers, our fans and our followers to turn their amazing, humbling love for the Citizen into money. But it falls short of the major objective that I set for it when it started in early 2017: generating enough money to pay people who are not as committed as us to run it.

“We knew going into this no one was going to get rich. But we too have fallen to the pressures of a collapsing local media industry in general. There are no meaningful digital advertising revenues to be had, and print revenue is so expensive to win that it is simply not possible to run a publication like the Citizen on the revenues that can be generated from one local paper alone.”

However, James also shared his pride at have produced five years of print editions and running thousands of articles in what he termed “the most hostile media environment of all time”.

“We did all of this with almost zero experience and only limited funding. There was only one truly substantial asset that we had all along: the incredible community of writers, editors, supporting organisations, individual supporters and readers like you who believed in us. Without you, it would quite literally not have been possible. I will always be grateful to all of you for making that dream come true.”