A judge has rejected a plea by a regional daily to name a teenage attacker who beat a woman unconscious as she went for an early morning run.

Cathryn Walmsley, 49, was left for dead after the 17-year-old launched a vicious attack on her after following her along a narrow, wooded lane in Nuttall Park, Ramsbottom,

This week she faced her attacker in court as he was sentenced to four years in custody after pleading guilty to intentionally causing grievous bodily harm.

Judge Mark Savill rejected an application by Bolton News court reporter Joanne Rowe to lift reporting restrictions in order for him to be named.  He will give his ruling in writing next week. 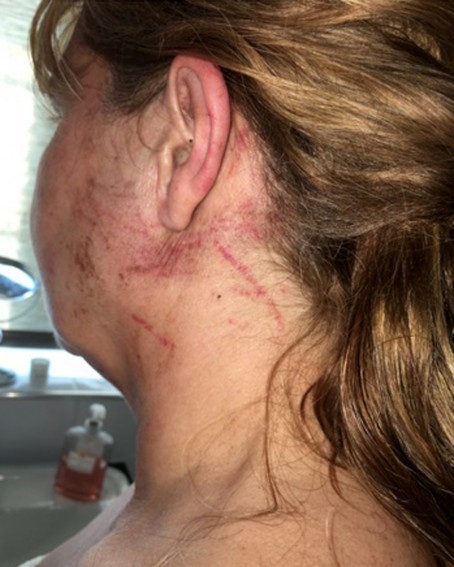 Some of Cathryn Walmsley’s injuries following the “ferocious” attack

Ms Walmsley insisted on reading her victim impact statement herself as the youth listened with his head bowed in the dock.

She revealed that she now does not like going into her home on her own, finds it hard to concentrate at work, wakes every morning with headaches and suffers from vertigo.

“I am really grateful I have not suffered more serious injuries,” she told the hearing at Manchester’s Minshull Street Crown Court on Monday.

“It still annoys me and frustrates me that I have no answer as to why this happened. I am a totally different person now. He [the defendant] needs to understand what he did and the suffering he has caused me.”

Robert Elias, defending, stressed that the teenager, who had never offended before, had not slept for 24 hours before the attack and been out with youths older than himself drinking and taking cocaine.

“There is no real answer as to why he did this. He wonders if his drug was spiked with something even worse than cocaine,” said Mr Elias.

Judge Savill said he accepted it was an isolated event but told the teenager that people should be able to feel safe outside their homes.

“It was a ferocious and savage physical assault on a vulnerable individual. You can only imagine what was going through her mind,” he said.

Bolton News editor Karl Holbrook told HTFP: “The defendant is only weeks away from being 18 and we took the view that his crime was so serious and had caused such great disquiet in the community that he should be identified.

“A section 45 order was in place preventing us naming him and so, at the sentencing hearing, we submitted a letter to the judge, outlining our concerns, citing case law and applying for restrictions to be lifted.

“Judge Savill required Joanne to go into the witness box and swear the oath before he questioned her about our letter’s contents.

“She stressed the principle of open justice and that the identity of the defendant was in the public interest, but conceded that we could still report the circumstances of the case properly even without naming the teenager.

“The judge decided that the welfare of the defendant, who came from a respectable family and had not committed offences before, outweighed the public interest in knowing his identity. He will give his ruling in writing next week.”

Added Karl: “Joanne is a highly experienced and efficient court reporter. She knows when it is worth challenging reporting restrictions in court and is never afraid of standing up and making her case, whether that involves handing over a letter or taking the witness stand to justify her case.

“She is tenacious and assertive and we are very proud to have her on our staff.”