Journalists to wed after surprise proposal in regional daily

Two journalists are set to marry after one proposed to the other in a regional daily – although the gesture prompted the shocked bride-to-be to question why her new fiancé had used a rival publisher’s title to pop the question.

The trip to York had been a surprise birthday present from 27-year-old Sam to his 26-year-old partner.

But after placing the ad, Sam, who is about to start a new public relations role with property website Rightmove, admitted he almost forgot to pick up a copy of The Press last Friday to present to his bride-to-be. 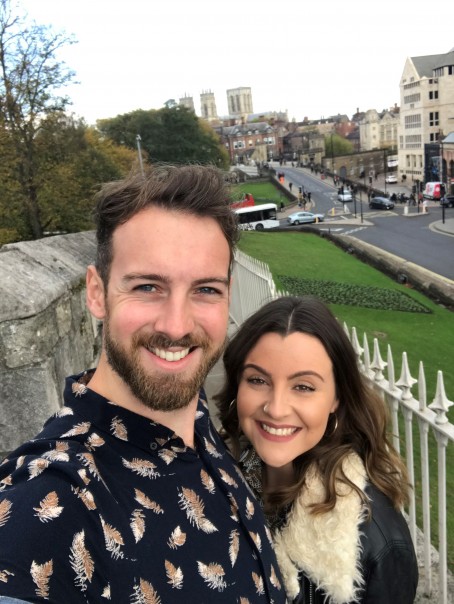 Sam and Libby in York

Sam told The Press: “We had been to the USA in September for Libby’s birthday and I’d got us tickets to see Drake in Miami, but he cancelled, so I owed her a birthday present.

“We wanted to go to York so thought ‘brilliant, that’s a surprise trip’. I thought it felt like the right time to pop the question as well, so I got a ring and the journalist in me wanted to make it a bit special so I put an announcement in Friday’s paper.”

He added: “I planned to do it just before dinner. We were walking round the Minster and I lost my bottle a bit, but they were going to lock the grounds up. I thought ‘it’s now or never’, so I gave Libby the paper and told her the clue to her birthday present was on page 40, then as she looked at it, I got down on one knee.”

So shocked was Libby that she responded to her new fiancé asking why he had decided to publish the proposal in a Newsquest title when they had both worked for Reach plc-owned publications.

Of her late birthday surprise, Libby said: “The only thing I wanted was a pair of trainers. He hadn’t told me where we were going for dinner, so I thought there might be an advert for the place we were going to dinner on page 40.

“When I saw it on saw he was on his knee I think I just covered my face with the paper. I was so shocked and I’m told my first sentence to Sam was ‘why did you put it in one of our rivals?'”