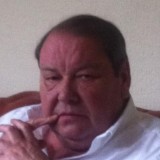 A daily newspaper journalist who had a “healthy disdain for bosses and bean counters” has died aged 63.

Tributes have been paid to Ian Dow, left, who spent more than a quarter of a century as a reporter and “foot soldier” at the Daily Record.

Ian joined the Record in 1983 after learning his trade at the St Andrews Citizen and Livingston Post, remaining at the Glasgow-based paper until a round of “inexorable cost-cutting” in 2009.

In an obituary for Glasgow-based daily The Herald, journalist John Neil Munro wrote: “His intellect and journalistic skills could no doubt have gained him promotion to better-paid jobs at [Record headquarters] Anderston Quay, but Ian was content to toil away as one of the Record’s foot soldiers.

“He had a healthy disdain for bosses and bean counters… his advice to young hacks was ‘Never take a job with a title. If you do, it’s only a matter of time before someone notices you and you’re on the way out the door.'”

He added: “Ian was deputy Father of the Chapel at the Record and was a wise-counsel for many fellow reporters on the frenetic news-room floor. He was a great story-teller with a coal-black, mischievous sense of humour.”

In his retirement, Ian was described as “devoted” to his family, photography and his love of cars.

John added: “He had a nice line in self-deprecating humour, but he was a top reporter who always wanted to expose injustice and ask the questions those in power didn’t want to answer.”

Ian is survived by his widow Moira and their children Alison and Graham.