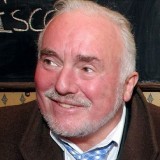 A journalist who spent more than four decades with a regional newspaper has died just weeks after finishing work.

Tributes have been paid to Nick Cole, left, who had worked on the staff of the Scunthorpe Telegraph from 1976 until the end of May this year.

After finishing as a staffer, Nick had continued to write his popular Barfly column shining a spotlight on the area’s pub trade.

Nick’s final column was published on 5 July, and he died at Scunthorpe General Hospital on Tuesday after a short illness.  He was 72.

Nigel Fisher, a colleague of Nick’s at the Telegraph since 1984 said his death marked “the end of an era in local newspapers”.

He said: “He was the last in a line of reporters who picked up the vast majority of their top stories by talking to people in the clubs and pubs. Many a Telegraph front page story began as scribbled notes made in the bar by Nick as closing time approached.

“Accompanying Nick to licensed premises demonstrated just how many people he knew in Scunthorpe and further afield. He was the brainchild behind many successful Telegraph campaigns, including free beer promotions.

“It’s very sad to lose Nick but those who knew him will have many happy memories of sharing a few pints and some laughs with him in local bars. In the Telegraph office, he was the go-to reporter when a lead story for the front page was required by the newsdesk. Indeed, he was often able to offer a choice of several.

“One thing was certain when it came to working with Nick – day in, day out – things were never dull.”

Telegraph digital editor Jamie Macaskill added: “Nick was a dedicated newspaperman, a huge character and a champion of the community in Scunthorpe and North Lincolnshire.

“He had a traditional approach to news, preferring to be out and about in the community meeting contacts, picking up leads and hunting down stories.

“He was straight-forward and wouldn’t mind me saying he didn’t have a huge amount of time for new technology. A pen and old notepad or even scrap of paper were his preferred tools to work with as any bewildered IT helpdesk worker would know.

“His loyalty to the Telegraph and its readers was beyond question. He will be sadly missed by his colleagues, many friends and contacts across the region.”

Nick ran a pub cricket league in Scunthorpe, organised the town’s annual Rock Open and Class Act talent contest, and also served as Father of the Chapel within the National Union of Journalists.

His daughter Natalia Robinson said: “He was happy and carefree and he would just want a pint. He was known by everybody. He was a normal lad and a young kid at heart.”