A journalist who went head to head with his former employer by launching his own newspaper has founded a second title to serve his hometown.

HTFP reported in May how freelance Steve Sowden had launched the Ilminster Press, a free monthly title to serve the Somerset town and compete with his old Newsquest-owned paper the Chard & Ilminster News.

Steve, pictured, has now expanded his business with the launch of the Yeovil Press to go up against Reach plc’s Yeovil-based weekly the Western Gazette.

Yeovil-born Steve, 47, has worked as a journalist in Somerset for more than 30 years, including time on the Newsquest-owned Yeovil Express. 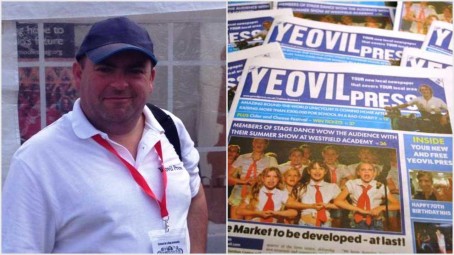 The Express ceased publication in December 2012 – just a month after the then Northcliffe freesheet the Yeovil Times, which was run by the Western Gazette, also stopped.

Said Steve: “I always said I would love to set-up a replacement free title in Yeovil – so I’m chuffed that I’ve actually gone and done it. It’s hard work, but when I still enjoy the same job I started in 1989 as a trainee reporter fresh from Yeovil College – I love it.”

He added: “Am I going to become a millionaire publisher off the back of it? No, I’m not. Am I going to try and put a smile back on the face of Yeovil by reporting the positive aspects of the local community, which there are plenty, I will certainly hope to do so.”

The new Yeovil print title will be published initially every other month, while the Ilminster Press is a monthly publication.

He is supported in the publication of Yeovil Press and Ilminster Press by freelance photographer Christine Jones and designer James Healey, of JRH Media.

Steve said: “There is no doubt – in my opinion – that people still like a good local paper which reports on the local news and local events.”