A journalist robbed at knifepoint has called for the identity of his jailed teenage attackers to be made public.

South Wales Evening Post reporter Geraint Thomas believes anonymity should not be granted to youths who commit violent crimes, saying they are offered “too much protection”.

Geraint was walking to work in Swansea when he was struck on his shoulders and neck from behind while in a wooded area.

He was then confronted by his attackers, one of whom was holding a large kitchen knife, who demanded his wallet before he decided to make a run from the pair. 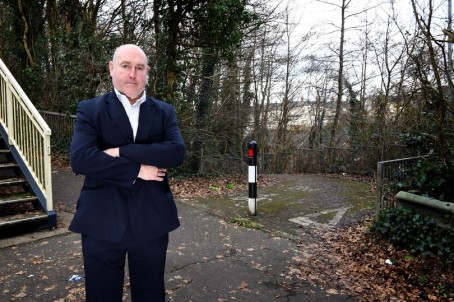 Geraint Thomas on the footpath where he was attacked

However, he slipped on a muddy bend and his attackers caught up with him – holding him on the ground at knifepoint.

In a piece for Wales Online, Geraint wrote: “I can’t describe my emotion at that point as fear. It was more a case of an abject feeling of hopelessness and concern, amplified by a significant amount of adrenaline rushing through my veins. The same thug repeated his request to hand over my wallet to which I replied: ‘I don’t have a wallet.’

“I reached into my right trouser pocket and threw a handful of change towards him. As he glanced down at the scattered coins, I caught movement in my peripheral vision. I turned to see that I had fallen in sight of the road and three vehicles, including a bus, had stopped, and now three people were gingerly making their way towards me, mobile phones in hand.

“Aware that help was at hand, the lead thug looked down once more and his eyes focused on my laptop bag, which had slipped off my shoulder and lay by my side. He made a quick grab for it and the pair ran off through the trees.”

The pair were later caught, and it was revealed they had threatened to kill a homeless man and attempted another armed robbery on the same morning they attacked Geraint last month.

The duo, who are 15 and 17, have now been sentenced to four and three years in custody.

Geraint added: “I think the courts offer too much protection to youths who commit violent crimes by granting them anonymity. I believe that if they take the decision to threaten someone with a knife the least that can expect is for it to be made public – perhaps such exposure may even act as a deterrent to others.

“I was off work for three weeks and took time to come to terms with what had happened to me. At first I was quite jumpy when out in public and acutely aware of any footsteps behind me. Walking carefree outside became a memory for a while.

“If anything, the incident has taught me to be ever mindful of how dangerous this world can be, even in places I had previously thought safe.”