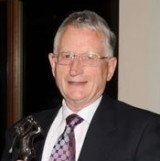 A journalist and editorial trainer whose career spanned half a century, including nearly 30 years with the same newspaper, has died aged 84.

During his time there, he held roles including sub-editor, editorial training officer, deputy news editor and golf correspondent.

Geoff was previously with the Kidderminster Times and the Evening Despatch, in Birmingham.

Later in his career he became a sub-editor with the Somerset County Gazette and the Taunton Times, and he edited a golf magazine.

Away from journalism and golf, he enjoyed snooker and jazz.