Trainer claims some journalism students ‘won’t pick up a phone’ 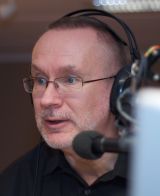 A journalism trainer sparked a social media debate after saying he is “terrified” by the number of journalism students who “won’t pick up a phone or challenge a press officer.”

Richard Horsman prompted current and former industry figures to take to Twitter and discuss the changing nature of journalism after posting on the site.

Richard, pictured, worked in radio and has also spent almost 25 years training journalists at Leeds Trinity University, as well as serving on the Broadcast Journalism Training Council’s board.

Richard wrote: “I’m actually terrified by the number of journalism students I encounter who can repurpose content across digital platforms like magic, but won’t pick up a phone or challenge a press officer.

“It’s what leads to the situation where a senior politician can visit a city in the North, ignore local journos and talk only to the travelling bubble pack. Because comms person says no. My day there’d have been a riot.”

Richard also added in response to comments on Twitter that the social make-up of newsrooms was also impacting the degree of challenge to press officers.

“Newsrooms are getting posher, all graduate. Less working class grit and chippiness in face of authority. Some employers putting schemes in place to tackle this, but a mountain to climb.”

Among those to respond was former Manchester Evening News journalist Simon Donohue.

He wrote: “What hasn’t been made clear is the extent to which cost cutting has taken people with those core skills – older, more experienced journalists – out of the game. It would be interesting to see the stats on age diversity in UK newsrooms. Bet they’re not pretty.”

Heart Yorkshire journalist Jen Thomas said: “I can see it from both sides. I’ve got no problem picking up the phone as I started on a newspaper at 16, but many press departments are aggressive or rude when they find out it’s ‘just’ a student calling and it puts them off trying again.”

And former Yorkshire Evening Post editor Nicola Furbisher commented that the “drive/demand to fill the box”and fill templates was “a subtle erosion of journalism.”

Speaking to HTFP, Richard said he was “surprised” by how much his initial post had taken off.

He said: “It suggests to me there is a latent issue in the industry which probably needs more thinking about.”

“I think there’s a general reluctance to engage in what we might call ‘persuasive discussion’. That balance between hacks and comms people seems to have been inverted.

“I see younger journalists often failing to challenge that.”