Jobs to the fore as HTFP gets homepage refresh

HoldtheFrontPage has unveiled a new look today with a series of changes designed to give greater prominence to its jobs platform.

The jobs search box has been moved from the right-hand column to a new position above the latest news stories to help make it easier for jobseekers to navigate to the jobs of their choice.

Our featured listings are also given added prominence with a new-look scroller in the right-hand column, with each listing given its own box.

Other changes to the homepage include clearer signposting for the job upload facility via a new mid-page banner. 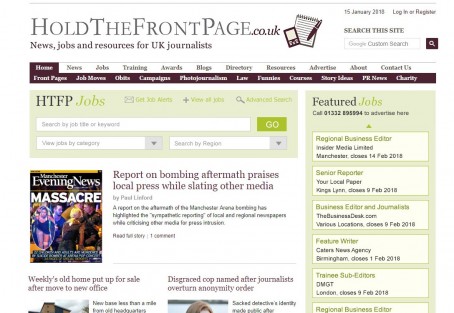 The new-look homepage with the jobs search box above the main news stories and the featured jobs scroller to the right.

The new jobs search box and featured jobs scroller appear on every page of the site, which now runs to an archive of more than 32,000 news stories dating back to its launch in February 2000.

Similar changes have been introduced on the site’s mobile version, with the search box preceding the main news section.

HoldtheFrontPage has previously had two major redesigns in the course of its 18-year lifespan.

The original design served until 2011 – although it can still be viewed on the National Web Archive – while the current, fully responsive WordPress platform was introduced in 2015.

Publisher Paul Linford said: “The latest changes are a refresh rather than a redesign but we hope they will be welcomed by jobseekers and advertisers alike.