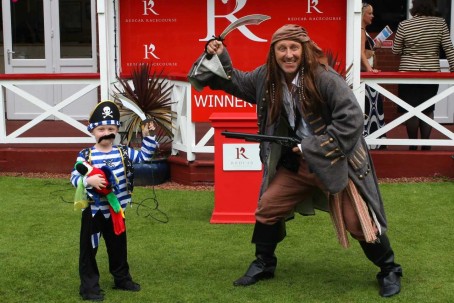 Well done to members of the Teesside Gazette’s newsdesk, who clearly read last week’s Friday Funnies and have managed to avoid a similar fate themselves as a result.

HTFP reported last week how a pesky bit of shadow meant Devon Live’s attempt to censor a photo of a naked man fell a little short of the mark.

By contrast, the Gazette noticed the unfortunate “phallic” wiring formation to the right of the younger pirate in the above photo, which was supplied to the newspaper by former Northern Echo Peter Barron, before it could be published.

Peter told HTFP: “I look after the PR and do some presenting at Redcar Racecourse and sent out some pictures from their Caribbean Carnival Day, which featured a fancy dress pirates parade.

“The newsdesk at the [Teeside] Gazette got in touch to say they couldn’t possibly use the attached picture because of the ‘wire arrangement’ in the background. It was only on closer inspection that I realised what they meant.

“I’ve pledged to be more careful with my cables in future to avoid phallic formations. Redcar Races have responded by promising to get me a wireless microphone.”