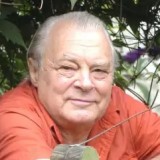 Sheffield-born John joined the Telegraph at is Barnsley office, having left school at 16, after transferring to its base in the city where he learned the basics of reporting, funerals and courts.

After later spending time working for the Daily Mail and the Daily Mirror, he moved to Canada where, working in magazines, he interviewed stars Rock Hudson and Marlene Dietrich, as well as Monroe.

In 1971 he compiled The Autobiography and Sex Life of Andy Warhol, a collection of interviews with friends and associates.

He later became travel editor of the New York Times and wrote guidebooks.

Of his time at the Telegraph, John told his old paper in 2004: “The thing I most learned from those early days was the ability to collect information and put it a coherent form.

“I remember going to a mining accident in Rotherham and everyone was vying to get to the one phone at the time.”

His autobiography ‘Manhattan Memories’ was issued in 2010

John, who lived in Ojai, California, died on 13 September after suffering several strokes.