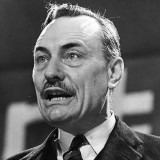 A former regional daily editor has indicated his support for a blue plaque commemorating the controversial politician Enoch Powell.

Nigel Hastilow, who edited the Birmingham Post, said the MP should “be remembered” during a debate hosted by Wolverhampton daily the Express & Star to mark 50 years since Mr Powell’s ‘Rivers of Blood’ speech.

Nigel was selected as a Conservative parliamentary candidate in 2007, but resigned after criticism of a column he wrote for the Express & Star in which he suggested Mr Powell had been correct to warn that uncontrolled immigration “would change our country irrevocably.”

According to a report on the event by the E&S, when asked if a blue plaque commemorating Mr Powell, pictured left, should feature in the city, Mr Hastilow showed his support for the idea.

Nigel responded: “People of significance in history, whether you agree with them or disagree, should be remembered. Powell is arguably one of the greatest politician of the last century.”

Mr Uppal and Councillor Jaspal both disagreed, saying a blue plaque would not be welcomed, while audience members “overwhelmingly” showed opposition to the idea.

The debate, held on Saturday, was chaired by E&S editor Keith Harrison.