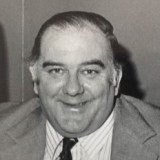 A former weekly editor who spent more than half a century in journalism has died aged 89.

Tributes have been paid to Alan Pinch, who edited the Southport Visiter and has been described by former colleagues as embodying the values of “old school journalism”.

Alan, pictured, worked in the industry for around 56 years and continued to write in his retirement.

The father-of-four, who spent more than a decade with the Visiter, died suddenly on 7 July.

Former Visiter editor John Dempsey said: “I was fortunate to work with Alan. He embodied the values of old school journalism, and his dry sense of humour was legendary as was his love of jazz and cricket.”

Former news editor Angela Danby (née Duffell) added: “I worked with Alan in the early 1990s when he was arts correspondent. He was a lovely man – highly professional, a stickler for accuracy and well-connected within the field of art and music.”

His daughter Jeanette Henry said: “Dad was always larger than life to me. I observed his enthusiasm and zest for his journalism and his sporting pursuits from a very young age.

“Whenever we walked through town with dad we would be stopping frequently along the way to chat with lots of people who seemed to know dad well. We inevitably ended up in a café with one or two of those acquaintances, so it was a win-win for us.

“When I was young dad was a voracious reporter – he went to great lengths to get his story. I remember being on holiday in Anglesey on a stormy day and a young man got caught in the undertow… suddenly there was much commotion and a helicopter landed in the rocks to save the swimmer.

“Once dad could see all help had arrived, he raced off to the phone box to call the Liverpool Echo with the story – I must have been about 14. One of the most important pieces of wisdom dad imparted on me was to find a career and or a pastime that I had a passion for – he assured me that my life would be richer for it.”

Alan’s grandson Karl, 49, added: “My granddad was always disappearing to chase stories when I was young – even when he retired.

“He was really committed and never stopped working, he was always writing up stories on his typewriter and I don’t think he ever worked a typical eight-hour day in his life. He was so stuck in his ways, you couldn’t change him and you wouldn’t want to.”