What’s the best way to mark your newspaper’s first anniversary? For Paul Winspear, editor of the Bishop’s Stortford Independent, the answer is simple – invite your readers in for “a bit of cake and a paper cup of Prosecco.”

It seems an appropriate celebration for a man keen to stress the importance a town centre office to which readers are welcomed has had for his paper’s success.

And it’s not just any office either. The Independent is based at the former home of the Herts & Essex Observer – the then-Trinity Mirror title from which both he and his news editor Sinead Corr were made redundant in 2016.

This week the Iliffe-owned Independent marks a year in print, and Paul is keen to credit the company’s commitment to opening and reopening town centre offices for its early success. 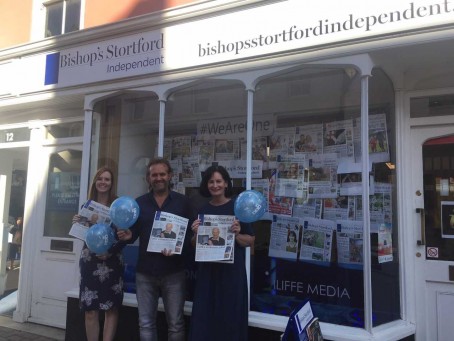 “A huge debt is owed to the fact that [Iliffe Media chief executive] Edward Iliffe believes in the value of printed products as long as they are relevant to their readership and have premises at the heart of their community”, Paul tells HTFP.

“We’re not ignoring the website, but we want people to buy the paper.”

The Independent is selling 3,000 copies on average a week and, according to Paul, is on course to turn a profit a year earlier than expected.

But he concedes an online strategy has played a part in the paper’s rise. August brought the title’s record month for web hits, with September expected to break it, while 5,000 people like its Facebook page.

Its best performing online story, about a van driver approaching an 11-year-old boy, came as a result of a tip from a woman who had visited the Independent’s office on an unrelated matter.

“It’s a great irony that having a town centre shop yielded our best story online,” he says.

“We’re still feeling the love of the community who embraced us before we launched. There was a mass outpouring of goodwill and we thought the bubble would’ve burst by now, but it hasn’t and people are still being nice about us.

“The town has embraced us and really supports us in what we’re trying to do. It’s nothing new, we’ve just gone back to basics. We’re a local newspaper, it’s quite a classy looking product that’s just full of relevant content.

“People really appreciate being treated like adults. I think they’ve kind of had enough of clickbait really.”

Priding his team on being able to tell people “something they don’t already know”, he adds: “It’s been a real eye-opener because the overarching message from the industry was web-first, and we still do adhere to that ethos when we feel that the story is right, but the vast majority of content appears in print for the first time.”

But they aren’t just reporting on the Hertfordshire town, with Sinead sitting on its Business Improvement District steering group.

Paul quotes his long-time colleague as saying: “We are participants, not observers, in this town.”

Paul admits his world was turned “upside down” two years ago, undergoing changes in his personal life as well as being made redundant by Trinity Mirror after 10 years in charge of the Observer.

He then worked on the Cambridge Independent, another new Iliffe title, while toiling behind the scenes on the Bishop’s Stortford launch.

Now things have come full circle in a little over 24 months – with Paul editing a weekly newspaper in the same town, from the same office and with the same news editor. But has anything changed?

“I’ve just swapped places with the photocopier”, he concludes.