The transition to a digital future in the local news industry is still “at an early stage” according to a major new report carried out by the Reuters Institute.

Researchers interviewed 48 editors, reporters, and commercial directors at newspapers in the UK, France, Germany and Finland, including representatives from the Trinity Mirror-owned Huddersfield Examiner and the family-owned Kent Messenger.

Their report, published today, praises the efforts being made by publishers to transition to a new digital business model and says local media remains a highly trusted source of news.

But it also highlights the challenges facing the industry including recruitment and retention of young journalists, with one local publisher saying local media was seen as “not cool.” 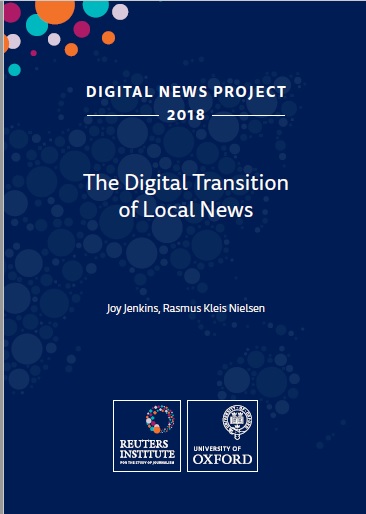 Key findings in the report, entitled The Digital Transition of Local News, include:

• Local and regional outlets compete for advertising with platform companies such as Google and Facebook, but also rely on these companies to reach online audiences.

• In the overall local news landscape, some local news outlets have been forced to shut offices or close completely, while others have consolidated.

The report says that the move towards embracing a digital future is “critically important for the future of local news, both as a business and as a part of local communities.”

It goes on: “Most of the local news organisations we cover here still generate 80–90pc of their revenues – and sometimes more – from legacy print operations that are in clear structural decline.

“Although many of them are building impressive new digital offerings, across their websites, social media accounts, and other channels, they have significantly lower reach among younger people in their communities than they have had historically among their older print readers.

“The traditional bundle of local news combined with other information about the weather, movie listings, sports results, and various forms of advertising is less attractive to younger users, and many interviewees believe that the classic combination of a traditional package overwhelmingly funded through advertising will not remain the mainstay of local journalism.”

The report praises the publishers’ “commitment to continued experimentation” and recognition of the “pressing need to continue to evolve the ways they serve their local communities through their journalism.”

But it adds: “For all the impressive work already done, the digital transition of local news is still clearly at an early stage.”

The report also contrasted the strategy of “local depth” pursued by the likes of the KM Group with the “national scale” approach adopted by bigger publishers.

Of the latter, it said: “These companies tend to feature centralised newsrooms producing online content that can then be shared across multiple newspapers and adapted to local  markets.”

By contrast, smaller publishers “are often highly tailored to the specific areas they serve but tend to have fewer resources and hence less complex infrastructures for digital production than other companies in the sample.

“Their emphasis on a more targeted geographic area and audience also make them less able to realise economies of scale and more dependent on local support in the long run.”

The report said that local journalism remains valued and trusted by audiences and that many local and regional media organisations are optimistic about the future of local news.

However Examiner editor Wayne Ankers, of those interviewed as part of the research, acknowledged the challenge of getting readers to trust the digital brand in the same way as the print brand.

“People don’t know what the Examiner stands for digitally, whereas they do know what we stand for print-wise. So, it’s getting people to trust us as a digital brand. I think that, once we’ve cracked that, our audience will continue to grow,” he said.

“Young people don’t see newspapers as a place where there’s going to be huge opportunities, so I think there’s that un-sexy, not cool side of things. Plus, a lot of people are very talented,” she said.

“Expecting people to do what they do for the money we can afford to pay them when other companies pay them a lot more is another difficult issue.”

The report’s co-author Joy Jenkins said: “Local newspapers, like other legacy media, are facing major challenges and no longer hold the dominant market position they once did.  But the newspapers in this report are also developing innovative ways to respond, from paid solutions journalism to collaborating with other newsrooms on digital initiatives to diversified business models, including in-house marketing firms, custom publishing, and events.

“They also enjoy a level of recognition and trust from their communities that will no doubt aid their continued transition.”

Co-author Rasmus Kleis Nielsen added: “Local news is incredibly important for making sure people are informed about their communities and empowered to engage in them. It is also clear that the business model based on advertising that historically has funded local news is seriously challenged today.

“That is why it is so encouraging we have identified several different examples of how local newspapers are working to reinvent their journalism and their business to adapt to an increasingly digital, mobile, and platform-dominated media environment.”