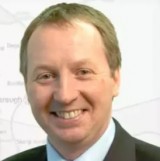 A deputy editor has called for more court cases to be heard on his newspaper’s patch – saying it has become “increasingly difficult” for his colleagues to cover important hearings.

The Peterborough Telegraph’s Nigel Thornton, left, has made the call after a judge presiding of a recent “high profile” case went out of his way to say its proceedings should be heard in the city.

In a column on the subject, Nigel said more and more Peterborough-related cases are being heard in Cambridge, almost 40 miles away, and vice versa.

Earlier this year Ministry of Justice had planned to close Cambridge Magistrates’ Court, prompting Cambridge News court reporter Tara Cox to campaign for the building to be kept open.

The MoJ later opted not to close Cambridge, but did close six other courts across the country

In his column, Nigel wrote: “My PT colleague Stephen Briggs is a vastly experienced court reporter and these days often cuts a lonely figure on the press bench in Peterborough’s magistrates and crown courts. His role reporting on some of the most important cases in the city has become increasingly difficult.

“The latest obstacle to local open justice is that more and more Peterborough cases are being heard outside the city, usually in Cambridge, and vice versa. The reason, presumably, is that it is more financially efficient – Cambridge Magistrates’ Court recently escaped by the skin of its teeth from being closed for good.

“The Ministry Of Justice has been attempting to save £1 billion and court closures is one of its options. But that comes at a heavy cost to the community, denying it the chance to see that justice is being done locally.

“Peterborough cases should be heard in Peterborough. It might save a few bob to do otherwise, but would it be worth it?”