A regional daily is trialling a change to its website which has seen the news page revert to the format it had prior to an online rebrand.

The change has been announced by Leicestershire Live, the Leicester Mercury’s online arm, which will allow readers browsing the site’s news page to see stories appear in chronological order.

The Mercury switched to the name Leicestershire Live online four months ago as part of a nationwide rebrand by owner Reach plc, and editor George Oliver says the site’s Leicester audience has doubled since the switch.

But, in a piece announcing the trial, George added he had become aware that the news page was now often very similar to the home page in the way that content was laid out. 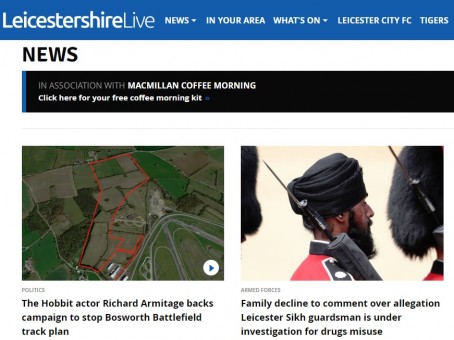 He wrote: “At the same time, research showed that a significant number of our readers were using the news section as their landing page. After looking into this a bit more we came to the view that it may be a habit which predates the layout of our current website.

“We think readers may have bookmarked the news page on the old site because it offered an automated feed which simply put the latest published article at the top of the page. Some Leicestershire Live readers want to keep coming back throughout the day to get the most up to date news available.

“That’s why we’ve decided to run a trial – from today and for the next few weeks – in which the news page will be run on a chronological feed. We would, of course welcome all readers to bookmark both our homepage and news section page.

“But we also wanted to differentiate between the two – and hopefully this trial will find a way of catering for everyone’s needs.”