A daily newspaper gave over its front page in tribute to a former regional daily news and sports editor who has died suddenly aged 67.

The Worcester News splashed on Friday on the death of Paul Ricketts, who spent 48 years with the paper and its associated titles.

Paul, hailed in the front page headline as a ‘beautiful soul,’ retired in 2015 after 25 years as sports editor at the News, having also previously held the roles of news editor and assistant editor.

Family, former colleagues and professional sports clubs are among those to have joined the tributes following his sudden death last Tuesday. 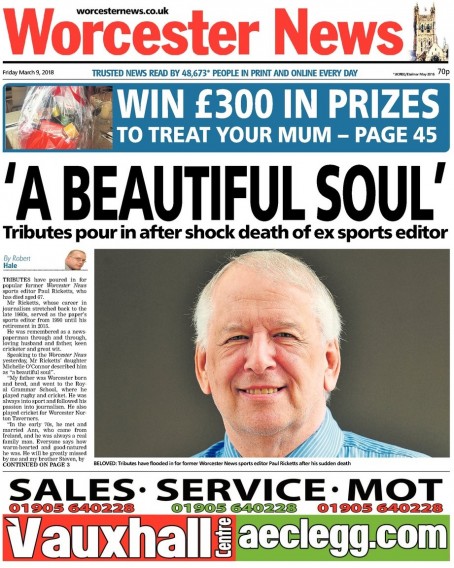 Paul’s career in journalism began on 1 October 1967, when he joined Berrow’s Newspapers Ltd, where his father John worked in the press room.

His early years were spent covering general news and sport at the Evesham office under the guidance of editor Bill Clarke, before becoming news editor and assistant editor on the Worcester Evening News in March 1988.

Two years later, he took over the sports editor mantle from Jack Godfrey.

Paul’s sister Lesley and son Steve have also worked at the News, in accounts and on the printing presses respectively.

James Reece, Paul’s successor as News sports editor, said: “We’ve missed Paul’s presence on the sports desk and in the Worcester News office ever since he retired and this news has been difficult to take in. Ricko meant the world to us really.

“We had so many laughs and good times. He was very caring and a gentleman but also an excellent journalist who was very well respected in the Worcester sporting community.

“Above all else, family was most important to Paul. To lose his beloved wife Ann the year after retiring hit him incredibly hard, but I know he gained strength from his daughter Michelle and son Steve along with his grandchildren who he was all so proud of.

“Our thoughts are with them all. Ricko will be much missed by so many people.”

Former sports reporter Chris Oldnall, who worked with Paul for 25 years, added: “I’m stunned by the news of his sudden death. I last saw him at a cricket match at New Road [home of Worcestershire County Cricket Club[ last season and we had a long chat about the good old days during our time on the sports desk.

“We had a good laugh about some of the situations we got ourselves in and the many characters we worked alongside over the years.

“Paul richly deserved his retirement after such loyal and dedicated service on the sports desk. It’s so desperately sad that his time for a more leisurely lifestyle has been cut short like this.”

Worcestershire County Cricket Club posted from its official Twitter account: “Worcs CCC send their condolences to the family of former Worcester News sports editor Paul Ricketts who has sadly passed away. Paul was a keen follower of the county.”

Paul’s daughter Michelle O’Connor said: “My father was Worcester born and bred, and went to the Royal Grammar School, where he played rugby and cricket. He was always into sport and followed his passion into journalism. He also played cricket for Worcester Norton Taverners.

“In the early 70s, he met and married Ann, who came from Ireland, and he was always a real family man. Everyone says how warm-hearted and good-natured he was.

“He will be greatly missed by me and my brother Steven, by his sister Lesley and by his grandchildren Harrison, Phoebe and Liam, as well as many friends and colleagues.”

Funeral arrangements will be confirmed in due course.