The Independent Press Standards Organisation has rapped the Northern Echo after it reported a group of unnamed women had become ill after a birthday celebration at a hotel, adding “graphic” CCTV footage had shown the women carrying out “lewd sexual behaviour including passing around sex toys and taking part in sex acts with hotel candlesticks while climbing on restaurant tables and chairs”.

However, she admitted that two members of the group had imitated a sex scene with a candelabra and one guest had used a unicorn horn, which was a party prop, to imitate a sexual pose. 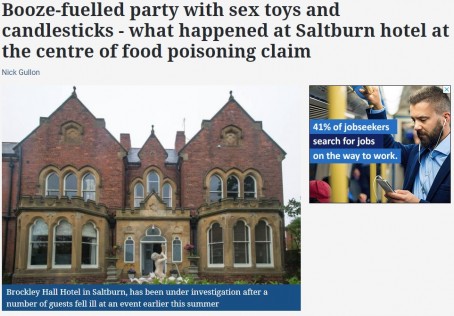 In her complaint to IPSO under Clause 1 (Accuracy), Clause 2 (Privacy), and Clause 10 (Clandestine devices and subterfuge) of the Editors’ Code of Practice, she also claimed the Echo had attempted to draw an association between the outbreak of food poisoning and the actions of the group.

Denying a breach of Code, the Echo suggested that the party-goers’ drinking and behaviour may have been relevant to the way they handled, consumed and reacted to the food, as well as how they recalled the events of the night.

The Darlington-based daily added it was possible to engage in sexual activity without removing one’s clothes, and said the reporter who viewed the footage had observed that members of the party took it in turns to lie on their back on top of a table in the room where they had been eating while other people in the party rubbed a plastic item and candlestick between the person’s legs.

It added there was a public interest in reporting on the full events of the night, given that the outbreak of food poisoning had been widely reported on previously.

The Committee found no other breaches of Code, but ruled that the Echo should publish its adjudication on its front page.

The complaint was upheld under Clause 1, and the full adjudication can be read here.