A city daily invited readers to “cut out their own cop” on its front page in a light-hearted nod to a proposed new council initiative.

The Edinburgh Evening News provided the cut-out figure on the front of yesterday’s edition after the City of Edinburgh Council announced plans to fight the problem of speeding by introducing life-sized cardboard imitations of traffic police officers at roadsides.

The newspaper’s exclusive revealed the council had “come under fire” over the initiative, although some senior councillors had praised the idea.

The idea for the front page was devised by news editor Ian Pope and brought to life by designer Kimberley Mogg, who is based at the Johnston Press Sheffield design hub. 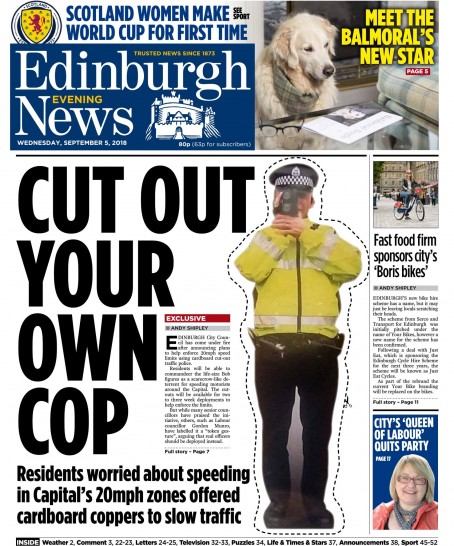 Evening News deputy editor Euan McGrory told HTFP: “Speeding has been a big issue for a lot of our readers especially since we’ve seen a big rise in cycling on the city’s roads and a 20mph limit was introduced.

“The cardboard cutout police officer isn’t necessarily a bad idea in itself and I gather they have had some limited success elsewhere.

“When the council put this forward as part of their plan for tackling speeding it seemed to me a sign of the times. The reality is that there are not enough police officers in the city to enforce the limit in many communities where residents have very reasonable concerns.

“Our news editor Iain Pope came up with the idea for the front page presentation and designer Kimberley Mogg executed it brilliantly.”