A regional daily has hit out after an MP and her husband accused the newspaper of practising “journalism with crayons”.

The Shields Gazette reported that Simon Buck, husband of South Shields MP Emma Lewell-Buck, had gone public with his support for plans to transfer part of his wife’s constituency into neighbouring Jarrow.

Mrs Lewell-Buck herself has previously stated her opposition to the Boundary Commission’s plan, saying she was “disappointed” by the proposal.

In his response to the Boundary Commission’s consultation Mr Buck, who is employed as a part-time researcher for Mrs Lewell-Buck, described the planned changes as “suitable”.

But both husband and wife have criticised the Gazette’s reporting of Mr Buck’s stance, with him describing it as “journalism with crayons” and her calling the newspaper’s coverage “shoddy” in separate Twitter outbursts.

In response, the paper published a front page editorial defending its coverage. 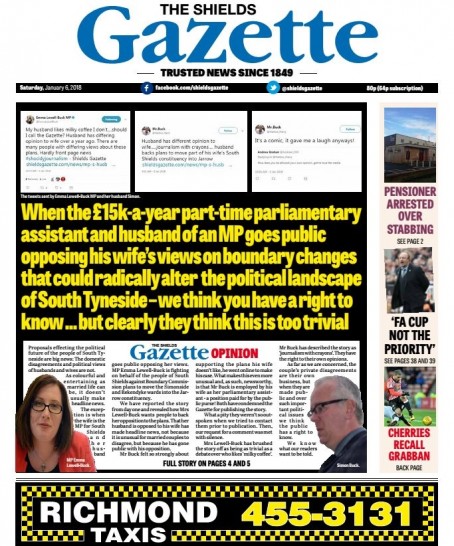 It read: “We have reported the story from day one and revealed how Mrs Lewell-Buck wants people to back her opposition to the plans.

“That her husband is opposed to his wife has made headline news, not because it is unusual for married couples to disagree, but because he has gone public with his opposition.

“Mr Buck felt so strongly about supporting the plans his wife doesn’t like, he went online to make his case. What makes this even more unusual and, as such, newsworthy, is that Mr Buck is employed by his wife as her parliamentary assistant – a position paid for by the public purse. Both have condemned the Gazette for publishing the story.

“What a pity they weren’t so outspoken when we tried to contact them prior to publication. Then, our request for a comment was met with silence.

“Mrs Lewell-Buck has brushed the story off as being as trivial as a debate over who likes ‘milky coffee’. Mr Buck has described the story as ‘journalism with crayons’. They have the right to their own opinions.

“As far as we are concerned, the couple’s private disagreements are their own business, but when they are made public and over such important political issues we think the public has a right to know. We know what our readers want to be told.”