A regional daily has defended a front page headline highlighting the impact of Universal Credit amid claims that it ‘spoiling Christmas.’

The Hull Daily Mail splashed this morning on the story of single mother-of-two Suzanne Coates, who says she could not afford to buy her children Christmas presents due to the benefit reform which can leave claimants waiting five weeks for payments.

But the paper’s headline – “I had to tell my kids Santa is not real” – led to accusations from parents and some rival journalists that it was ruining the “magic” of Christmas.

One local branch of Tesco even turned copies of today’s edition around to show the back page instead of the front for fear of upsetting youngsters. 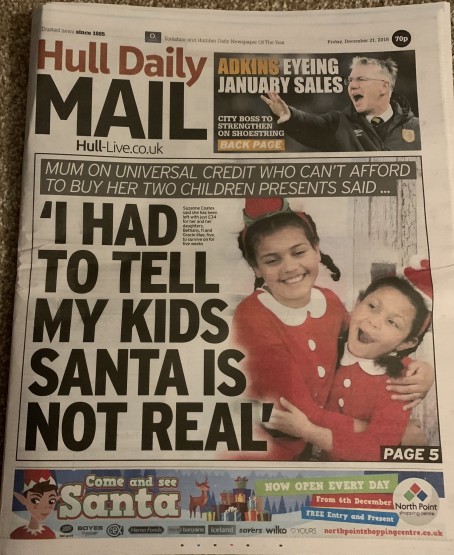 “I’m not blasting their paper generally as there are a lot of hard working, genuinely good journalists (and people) working there in what is a tough climate for the paper industry. I just took exception to that headline as someone who loves the magic of Xmas for kids.”

Sarah Benecke added: “Thank you for possibly spoiling the childhood dreams for many children today with your front page headline, do you people really not have a brain cell between you? Grinch.”

One anonymous parent, who contacted HTFP to complain about the splash, said: “With just a few days to go before Christmas, a front page headline such as this leaves a very sour taste in the mouth.  The Hull Daily Mail should have shown more thought.”

Others, including the BBC’s David Burns, pointed out the juxtaposition between the headline and a ‘Come and see Santa’ advertisement beneath it.

And campaign group Hull Against Hate And Prejudice posted a photograph on its Facebook page showing one branch of Tesco which had turned all copies of today’s edition around to show the back page instead of the front. 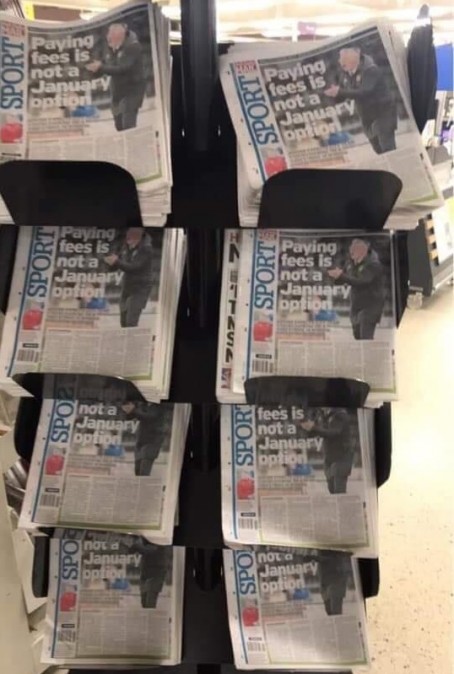 The group said: “Although the paper is highlighting a significant issue that many are facing because of cuts to welfare and universal credit, it’s been stressed such a headline didn’t have to be one causing further distress and potential upset to young children who may not understand.”

Digital editor Jenna Thompson told HTFP: “Today’s front page is a very sad story written to highlight the problems that people less fortunate than most are suffering with Universal Credit.

“The story showed how one mum was so desperate as Christmas approached that she felt she had to tell her children that Santa did not exist as she could not afford to buy them presents. That is where the headline came from – one mother at the end of her tether telling her own children that story, which she says they accepted.

“The headline doesn’t say that Santa is not real, it says that one mother has chosen to tell her children that he isn’t because of the desperate situation she faces.

“This article was viewed more than 20,000 times online and we received no criticism.

“Sadly, we have even had one person today who said they don’t care about this family and others who are struggling this Christmas, they just care about their kids believing in Santa.

” Others have commended us for highlighting this issue and making people understand that this a very real and serious problem facing some families right now.

“When the story is read and the headline is given its full context, it is clear that it is about Universal Credit and the very damaging impact it is having on the people in Hull. It is not about Santa.”

The Mail was not the only regional daily to splash on the effects of Universal Credit today.

Its Reach plc sister title the Huddersfield Daily Examiner splashed on the “grim truth” of the scheme, running a two-page special report inside. 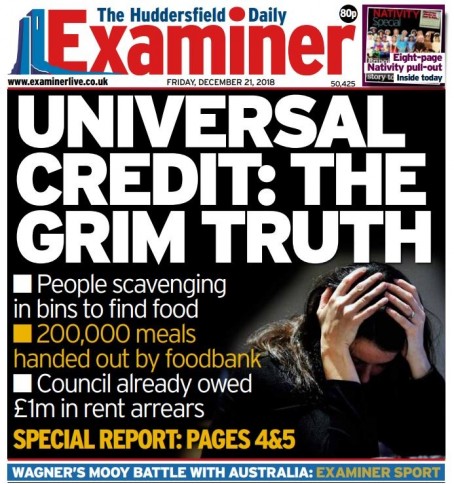 Editor Wayne Ankers said on Twitter: “As most prepare for a feast, let’s think about the impact Universal Credit has had on some of Huddersfield’s struggling families. It is the grim truth, and it makes grim reading.”

The splash won praise from Isle of Man Examiner editor Richard Butt, who said: “Strong front page from another Examiner.”