A city news website successfully challenged an order barring journalists from revealing details of a far-right activist’s imprisonment for contempt of court.

On Friday morning, Yaxley-Lennon was arrested outside the court, where he was conducting a Facebook Live video viewed hundreds of thousands of times, on suspicion of a breach of the peace.

A court order is currently in place temporarily banning any reporting on a trial being heard at Leeds. 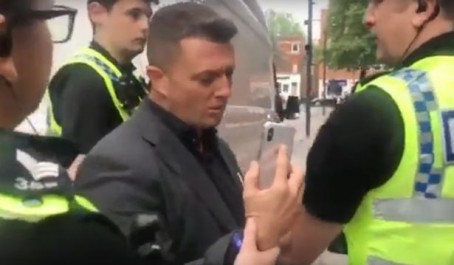 The 35-year-old was arrested and held in the court cells before being taken up to the courtroom to face said trial’s judge, who sentenced him to 13 months in prison that day for contempt of court.

Yaxley-Lennon was sentenced to three months imprisonment suspended for 18 months last May, after he was found in contempt of court over a case in Canterbury, and had been warned that committing further offences would result in incarceration.

A reporting restriction was applied to Yaxley-Lennon’s arrest, charge and hearing on Friday, but was successfully challenged today by Stephanie Finnegan, court reporter for Leeds Live and its Trinity Mirror sister newspaper the Huddersfield Daily Examiner.

A piece on the Leeds Live site states: “[Yaxley-Lennon] came to Leeds on Friday morning – and it was his Facebook Live which led to his imprisonment that afternoon. But this was not simply a case about freedom of speech, despite what his supporters have said on social media.

“His arrest and conviction were to protect our justice system – and ensure a trial that cost hundreds of thousands of pounds didn’t collapse.

“It was to ensure defendants got a fair trial, that justice could be done and to try and prevent witnesses from having to endure giving evidence and being cross-examined all over again in a second trial.”

Explaining why his sentence hadn’t been reported before today, the piece added: “A reporting restriction was applied to Stephen Yaxley-Lennon’s arrest, charge and hearing on Friday. Although Leeds Live were aware of the proceedings and our court reporter was present for his sentencing, we did not report the story on Friday.

“The restriction didn’t mean the case could not be reported at all – it just postponed reporting of the proceedings until there was no risk of his case prejudicing another trial.

“Unfortunately many publications reported the story on Friday, in breach of the reporting restriction – and these publications could potentially be prosecuted for being found in contempt of court.”