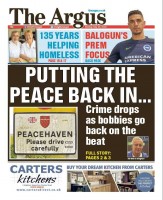 Brighton daily The Argus has topped the league table of circulation figures for regional dailies after posting a sales fall of just 2pc in the first half of this year.

With the majority of regional titles recording double-digit drops in circulation in the period January to June compared to the same period in 2017, today’s six-monthly ABC figures made mostly grim reading for print titles.

But regional publisher Newsquest performed well relative to the rest of the industry, with five of its daily newspapers in the top ten performing print titles.

As well as The Argus, the Swindon Advertiser and Oxford Mail also managed to limit their year-on-year percentage circulation declines to single figures.

However a slightly different picture emerges when bulk sales and free copies are excluded from the figures.

An analysis of the figures by HTFP, focusing on retail sales alone and stripping out bulk sales and free copies, sees the Belfast-based Irish News topping the ‘alternative ABC’ league table with a year-on-year sales fall of 5.15pc.

A similar exercise carried out by HTFP in March after the publication of the ABCs for the second half of 2017 also showed the Irish News as the best-performing UK title, with its circulation 4.3pc down year-on-year on that occasion.

Also performing well on retail sales alone were the Press & Journal, the Courier and the Paisley Daily Express.

The Argus comes in at seventh place in the alternative table with a circulation drop of 9.81pc.

Fifteen of the UK’s 71 regional daily titles did not submit six-monthly circulation figures to ABC meaning they are not included in the latest figures.

All are listed by ABC as having moved to annual reporting meaning their figures won’t be available until February 2019.

The full list of regional dailies in order of circulation decrease is below.  Scroll down to the second table to see the figures with the bulk sales and free copies stripped out.

The ‘alternative’ table, stripping out free copies and bulk sales, is as follows: