Award-winning editor stands down after 36 years in the business 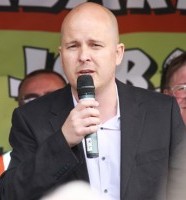 A long-serving regional editor who was named the best in the business in 2012 is stepping down after 36 years in the industry.

Steve Hall is bowing out as editor-in-chief of Reach plc’s East Midlands titles including the Derby Telegraph which he has edited in two separate spells, with a stint as managing director of the paper in between.

He will be replaced as editor-in-chief by Marc Reeves, whose portfolio will now take in all Reach newsbrands across the East and West Midlands.

Steve, left, revealed he is planning a new venture which will he said would “utilise the skills” he developed in leading both the editorial and commercial teams in Derby.

He said: “I have had a wonderful 36 years in regional media and have worked with some of the most fantastically talented and committed people. Together we have fought to save jobs, expose abuse scandals, track down on-the-run paedophiles, build new hospital units and raise hundreds of thousands of pounds for charity.

“I wish all the teams in the East Midlands – and across the wider Reach group – every success for the future.

“I now plan to take a short break before utilising the skills I developed leading both editorial and commercial teams in a new venture.”

Before taking over at Derby for his first spell as editor in 2005, Steve edited the Express and Echo in Exeter, then a daily title, for seven years.

He became MD in 2012, but returned to the editor’s chair four years later as well as being appointed to his wider role as regional editor-in-chief, also overseeing the Nottingham Post, Leicester Mercury and Burton Mail.

Reach’s regional editorial director Alan Edmunds said: “Steve is a first class editor with a superb record and has been a leading figure in the Midlands media for many years.

“During his time steering the East Midlands region for Reach he has led many important changes in excellent fashion. He has our most sincere thanks and will leave at the end of November with our very best wishes.”

With Marc now taking on an expanded brief, his role as senior editor in Birmingham will be taken over by Anna Jeys who is also promoted to the role of editor of Birmingham Live.

Julie Bayley, who has run the Telegraph website under Steve for a number of years, is promoted to the position of editor for DerbyshireLive.