Actress wins IPSO case despite being given partial copy approval

The press watchdog has upheld an actress’s complaint against a Sunday newspaper about a piece over which she was given partial copy approval.

The Independent Press Standards Organisation has rapped the Dundee-based Sunday Post after it failed to provide a reporter’s note of a quote reportedly said by Joanne Thomson during an interview with the newspaper carried out in the wake of sexual harassment allegations against Hollywood producer Harvey Weinstein.

Scottish-born actress Ms Thomson said the newspaper’s write-up of the interview had given the impression that she believed that the so-called “casting couch culture” was worse in Scotland than in the United States of America.

The paper’s front page headline – over which Ms Thomson was given copy approval – was ‘I never met any men like Harvey Weinstein when I was in Hollywood. I met plenty in Scotland though.’ 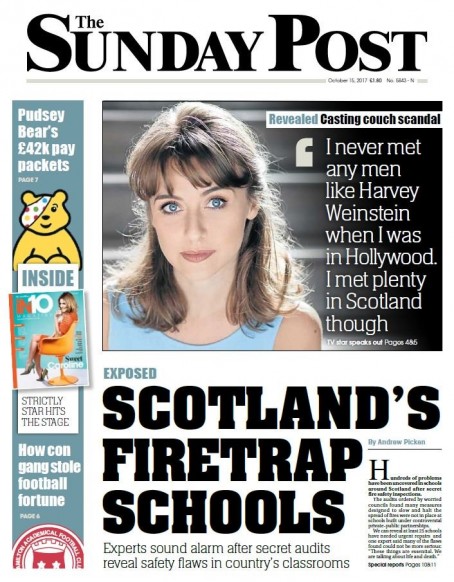 The front page headline had been approved by Joanne Thomson

The strapline of the article inside the paper was ‘Actress speaks out in wake of casting couch scandal and says sexism and harassment in Scotland is as bad as Hollywood,’ which the Post claimed had an idenitical meaning to the pre-approved headline.

In the piece, Ms Thomson was quoted as having used the words “all I know is that I did not experience the problems there that I have done here” – but the quote was not found in either the reporter’s notes or a transcript of the interview recorded by Ms Thomson.

Complaining under Clause 1 (Accuracy) of the Editors’ Code of Practice, Ms Thomson said the Post had misreported the interview.

The Post apologised for any upset the article caused but did not accept a breach of Code, denying the article suggested the scale of sexual harassment within the film industry in Scotland was as bad as in America.

In its defence, the newspaper pointed out that Ms Thomson had been repeatedly quoted in the article as saying the scale of the problem in Scotland was not the same, and argued that the inside strapline had an identical meaning to the front page headline, which the actress had pre-approved after the paper contacted her prior to publication due to the personal nature of the article.

But IPSO found the Post had failed to take care over the accuracy of the claim that the complainant had said that sexism and harassment was as bad in Scotland as in Hollywood.

The Committee ruled that reporting this, in the context of widely reported allegations about various figures in Hollywood, misrepresented the comparison Ms Thomson had made between the two industries, and suggested that the allegations she had made were more serious than those included in the article.

While the reporter said he had written the article shortly after the interview, IPSO observed that there was no note of this, and that it seemed to contradict the complainant’s position in the recorded section of the interview, and the reporter’s notes.

The complaint was upheld, and the adjudication was published on the Post’s website.