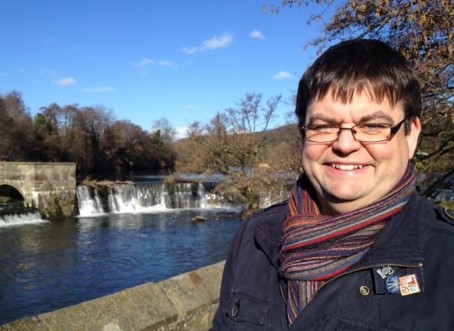 A former weekly editor who forged a new career co-ordinating a World Heritage Site has been named in the New Year’s Honours List.

Adrian Farmer, above, was editor of his hometown paper the Belper News for 14 years until leaving to take up a PR role with the Derwent Valley Mills World Heritage Site, which includes parts of the Derbyshire town.

He later became the site’s heritage co-ordinator and has been involved in a number of local campaigns against over-intrusive development in the area around the site.

Adrian, 49, was awarded the British Empire Medal “for services to the community in Belper and Derwent Valley, Derbyshire.”

After studying journalism at Richmond College, Sheffield, Adrian began his career in the regional press as a reporter on the Ripley and Heanor News in 1986.

He took up his first editorship at the Eastwood and Kimberley Advertiser in 1990 before taking charge of the Belper News later that year.

In 1999 he also took on responsibility for the Ripley and Heanor News.

He left journalism in 2004 to become communications and outreach officer for the World Heritage Site before moving into his current role.

Adrian told HTFP:  “I loved my time at the Belper News and was determined that when I moved on it’d be in a way which allowed me to stay in the town.

“It’s an inspirational place, with so much wonderful heritage, and I’m proud to be able to play my small part in making it a great place to live and visit.”

Today’s honour is not the first time Adrian has received recognition for his work in promoting tourism and conservation in the town.

Five years ago he was named as one of two ‘tourism superstars’ in a national competition organised by national tourist board VisitEngland and the Daily Mirror.

Adrian has also put his writing skills to good use by penning several history books about Belper’s past.

They include The Spirit of Belper, published in 2010, and Belper Through Time, in 2012.