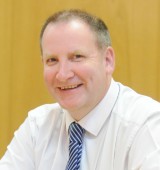 Three former daily editors have been appointed to a panel which will conduct standards investigations into the press watchdog’s member titles.

Paul Connolly, who was group managing editor of the Belfast Telegraph, Richard Walker, who edited the Sunday Herald and The National, and ex-Derby Telegraph editor Neil White, pictured, have been unveiled as the three industry members on the Independent Press Standards Organisation’s standards investigation panel.

They will oversee investigations launched at the request of IPSO’s board to investigate where the regulator has serious concerns about the behaviour or actions of any of its members.

Such investigations could be launched if a member has committed serious and systemic breaches of the Editors’ Code, if they fail to comply with the requirements of the IPSO board or if an annual statement identifies significant issues of concern in relation to breaches of Code.

The three industry panellists will be joined by six other independent panellists, who have also now been appointed.

IPSO’s Head of Standards Charlotte Urwin said: “I am delighted to announce the appointment of these nine panellists.

“The decision to launch a standards investigation is a serious one and would likely arise in response to the identification of serious issues at a particular publisher.

“I am pleased with the quality of candidates we attracted for this important role and the calibre of those we have appointed.”