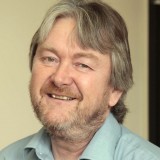 A journalist who once laid claim to being the UK’s youngest newspaper editor has died aged 69.

Tributes have been paid to Steve Catchpool, left, who edited the Holmfirth Express in the 1970s and later went on to work for the Huddersfield Daily Examiner.

At the Examiner, he rose to the rank of chief sub-editor and also wrote regular columns as its TV critic.

After the Examiner acquired the Holme Valley Express and closed the Holmfirth office, Steve returned to overseeing production of the paper he used to edit from the Examiner offices.

His brother Andrew, an Examiner photographer who was 12 years his junior, said: “Because I was considerably younger than him he treated me a little bit like a son. He was very supportive in whatever I wanted to do and always took an interest in what I was doing.

“He supported me when I went into journalism. He was a proper big brother. We were very proud of him.”

Steve began his career as a trainee reporter at the South Yorkshire Times, in Mexborough, and quickly rose to become editor of the Express before joining the Examiner in the mid 1970s.

When the weekly titles were discontinued Steve worked on the production of the Examiner up to his retirement in 2013.

Steve met his wife Carol at the South Yorkshire Times where she worked in the adverting department.

The couple, who married when Steve was 21, travelled extensively, visiting most European countries, New Zealand and the Far East.

Steve is also survived by his sister Diane.

A funeral service will be held at 1.15pm on Wednesday 22 November at Huddersfield crematorium, followed by a wake at Wortley Hall, Wortley, near Penistone.