Journalist breaks news of terminal illness in his old paper

A journalist and broadcaster has broken the news that he is terminally ill in the regional daily where he used to work.

Former BBC Radio Oxford presenter Bill Heine chose the Oxford Mail as the medium to announce he has been given 18 months to live after being diagnosed with leukemia.

American-born Bill began his career on the Oxfordshire Star before moving to the Mail and later embarking on a radio career which lasted more than 30 years.

The Mail splashed on Bill’s announcement on Thursday. 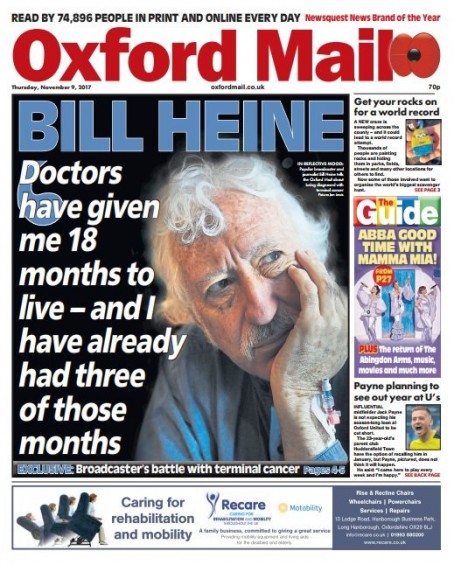 He told the paper: “Doctors have given me 18 months to live – and I have already had three of those months. That doesn’t leave long left.

“I feel like a cricket ball that’s just been hit. I want everybody to know, though.

Bill, 72, is currently compiling a ‘bucket list’ of things he wants to do before he dies.

He added: “What they don’t tell you is you can’t do most things because you’re not allowed to fly because you can’t get insurance… It has forced me to look at the physical sense of who I am.

“But I want people to know about it – and wanted them to find out through the Oxford Mail. I thought that if I wrote about it in a way that was accessible and engaging it would help me to fight it too. Also, people don’t understand the humour, as some of this is extremely funny.

“I have met so many other people at the Churchill [Hospital, in Oxford] who are so brave. It’s hard to imagine how they cope. You just see the ripples beneath the surface.”