A local newspaper reader has brought this blog’s attention to the Sheffield Star’s accurate coverage of Hillsborough within a day of the disaster.

Isabella Stone, in a letter published by The Guardian on 27 April 2016, wrote: “I was living in Sheffield in 1989, and bought a copy of the The Star, Sheffield’s special edition on the tragedy, published the following day, Sunday 16 April [1989].

“Reading it again, in the context of the inquest verdicts, it is striking to note that the paper’s account of the disaster, written by local reporters in the hours following it, and based on eyewitness accounts, is virtually identical in its conclusions to that of the jury’s verdicts 27 years later.

“The front page explicitly states that ‘Liverpool fans were not to blame, but the victims’. It also describes the decision of Duckenfield (not named at that stage) to open the gate as ‘a moment of madness,’ which ‘backfired in a catastrophe which brought about the biggest soccer tragedy in the history of the British game’.

“Harry Livermore, the lawyer who represented the Heysel stadium defendants, and who was at the game in a different stand, is quoted as saying that the tragedy ‘was entirely due to the inefficiency of Sheffield Wednesday FC for their lack of proper organisation, and the inefficiency of the Sheffield police. It may be hard luck that they are held responsible – but this again is a tragedy that should never have happened’.”

Isabella added: “It was crystal clear from the very outset what had happened and who was to blame. This makes the subsequent lies and cover-up, and the extent to which they were believed, even more damning.”

This blog tracked Isabella down to where she now lives, in Matlock, and arranged to borrow her archive edition of The Star to look at the detail of how Hillsborough was reported. 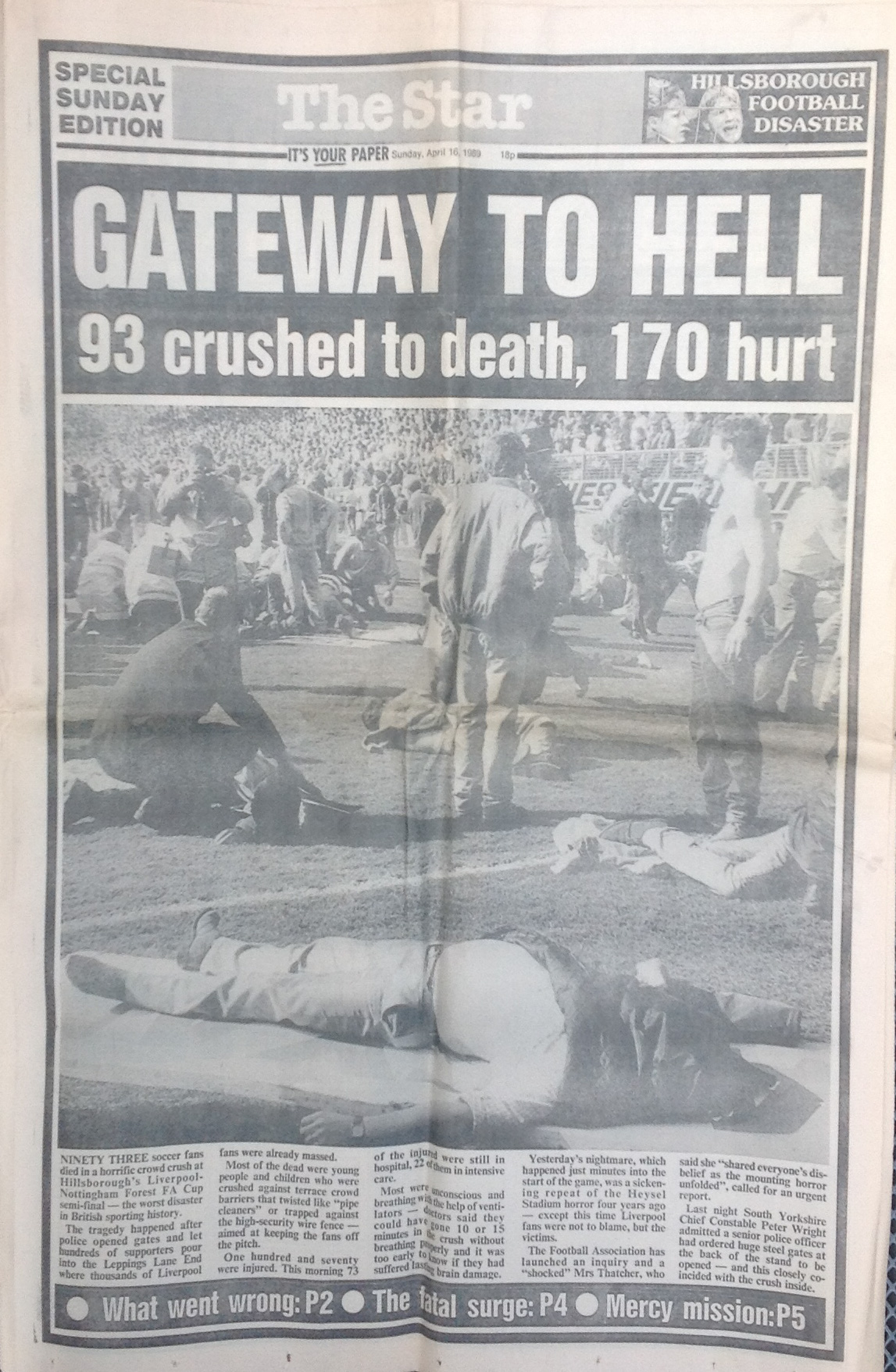 And despite the distressing facts, the paper was a privilege to read because of the painstaking care taken by the local Sheffield journalists back in 1989.

First of all, Isabella was spot on with the descriptions and quotes she referenced, just snippets among columns and columns of detailed, multi-sourced reportage on exactly what happened.

The headlines on the inside pages reflect The Star’s clear ‘live’ explanation of the disaster – without an iota of the bias, distortion and downright lies that later followed, largely in the national media. 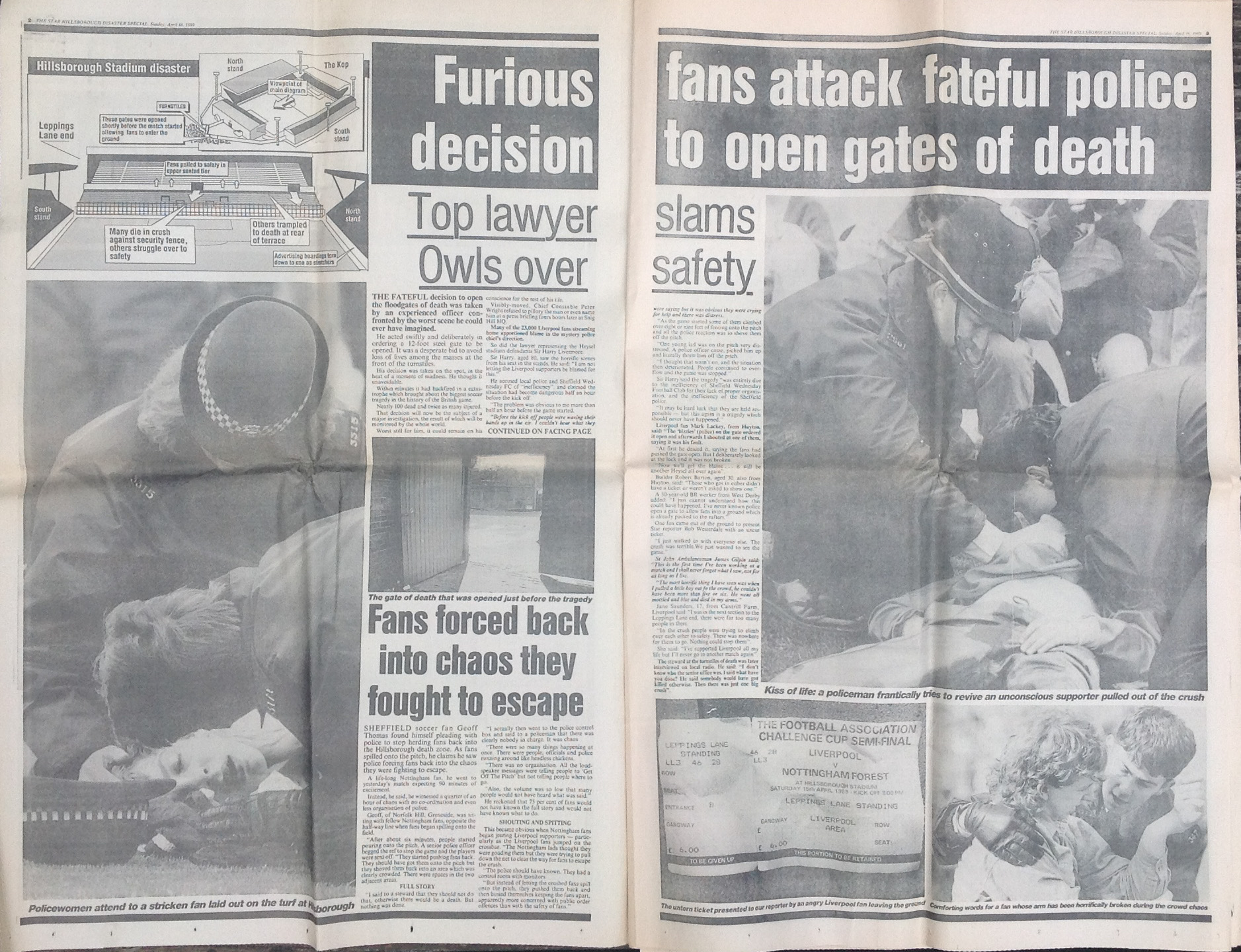 The main headline across pages two and three reads: ‘Furious fans attack fateful police decision to open gates of death’, with the stories underneath quoting five fans, an ambulance man, a steward and the retired Heysel-disaster lawyer, all of them eyewitnesses.

Pages four and five goes into more detail, with 70-odd paragraphs of quotes from several more fans who had watched the crowds build up before the gate was opened. 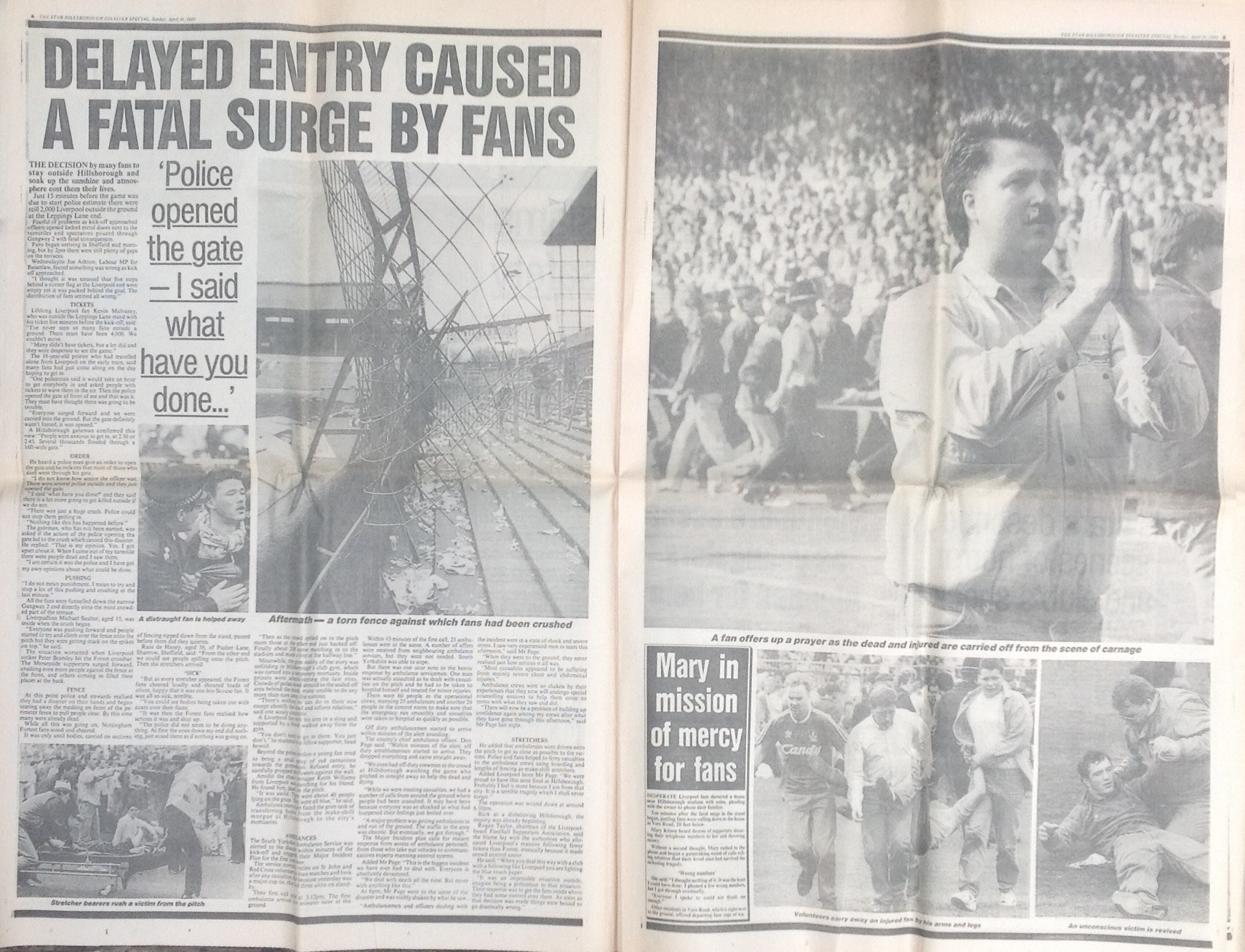 The headline and subheading again reflects what the reporters were told: ‘Delayed entry caused a fatal surge by fans’; and: ‘Police opened the gate – I said what have you done…’

The headline on page seven reads: ‘Supporters help with rescue amid the chaos and despair’, describing in just nine words the truth that The Sun notoriously twisted out of all recognition. 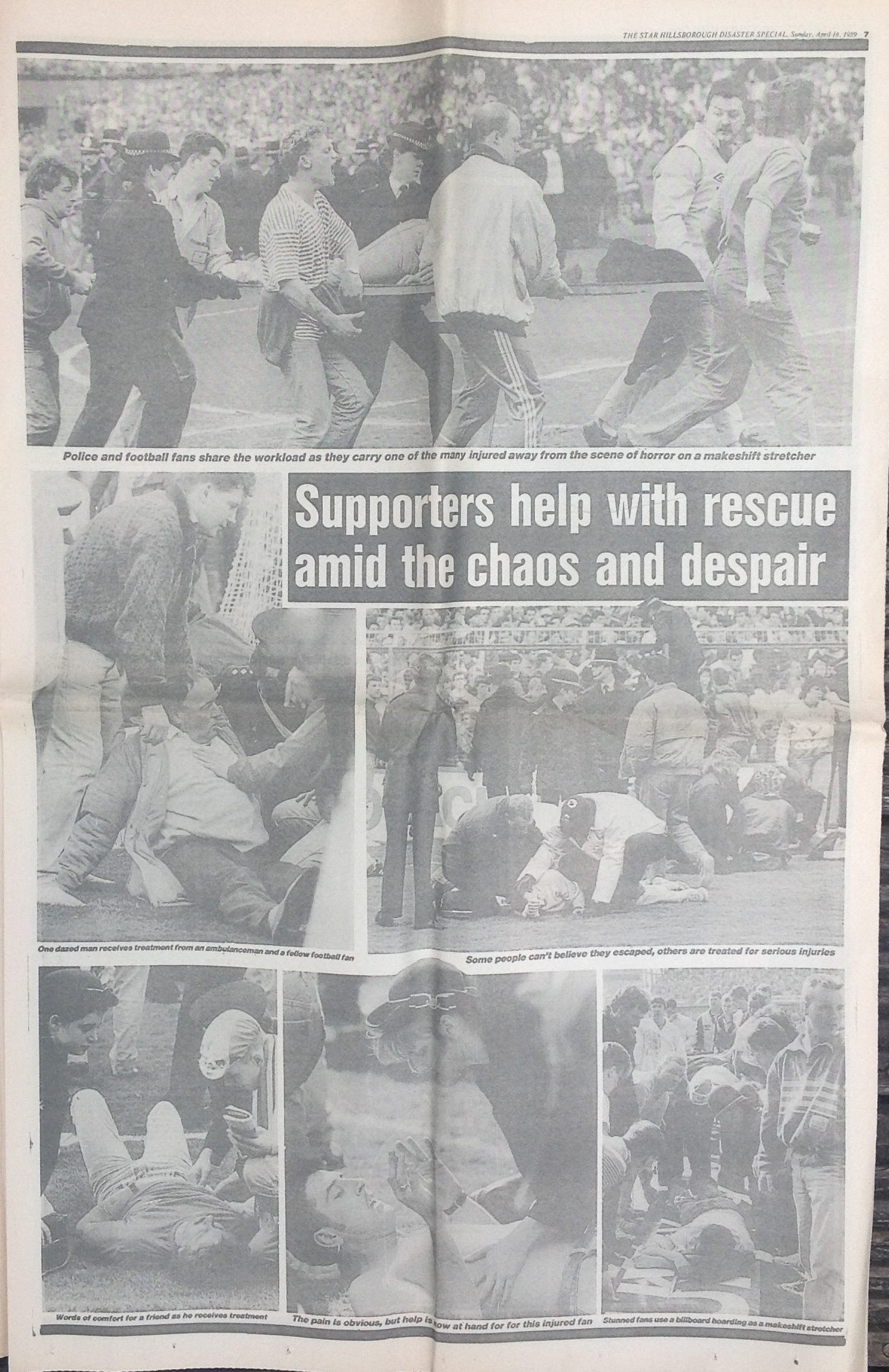 There were a total of 62 black and white pictures in the 16-page broadsheet paper, and these were credited to the following photographers: Stuart Hastings, George Heppinstall, Brian Vaughan, George Tyrer, Mike Waistell, Dennis Lound and Steve Ellis.

They are all named here because they deserve credit for how they told this initial Hillsborough chapter so honourably 27 years ago.

Today, we often hear people talk about the democratic deficit faced because of the erosion of the regional press, and the Star’s example from 1989 should prompt the industry – and perhaps the state – to consider two very serious questions:

The recent and ruthless momentum of restructuring across the entire newspaper industry suggests pessimistic answers to the above questions, as can be seen in this analysis by just one esteemed observer late last month.

It should be mentioned that even the The Star received some criticism for its initially unquestioning reports of South Yorkshire Police’s untrue claims about fans’ behaviour that came in the weeks following Hillsborough.

But those incongruities were nothing like how The Sun and other national media shamed themselves for decades, while the Star later won plaudits for its long-term coverage of the Hillsborough legal battles and fans’ personal stories.

That aside, the Star’s ‘Sunday special edition’ of April 16 1989 sets a fine example of how contemporaneous news reporting can and should work in the public interest, given proper staffing.