Striking journalists from Newsquest titles have taken their dispute right to the top by demonstrating outside the company’s headquarters.

Members of the National Union of Journalists from three centres which are out on strike have travelled to the group’s base at Weybridge in Surrey, along with national representatives of the union.

Journalists from Southampton are in the third day of their strike, while those from Brighton and Darlington started their 48-hour walkout yesterday in a dispute over pay and job cuts.

And the NUJ says messages of support for the strikers have flooded in from journalists across the UK, many of which have been listed on a blog set up by chapel members in Darlington, where a video of a march through the town has also been posted. 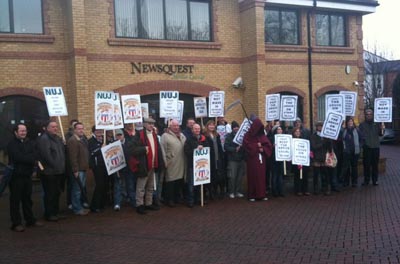 David Brine, father of chapel at the Southampton-based Southern Daily Echo, said around 18 journalists from his centre, along with 14 from Brighton had made the journey to Newsquest’s headquarters, along with one representative from Darlington.

He said: “We are having a protest outside. Unfortunately we have missed Paul Davidson (Newsquest chief executive) who has gone out but we bought him a card saying sorry we missed him and we had hoped to have a chat with him.

“We have decided to keep it in good spirits. We are not here to disrupt anything. We are just here to show the strength of feeling that we have.

“We are going to sit down afterwards and decide where we go in future because nothing has been resolved.”

NUJ deputy general secretary Michelle Stanistreet, who also attended the demonstration, added: “We want the people of Weybridge to know that a company based in their town is destroying proper local journalism in many places across the UK.

“We think Newsquest shareholders also need to recognise that the group’s refusal to talk is endangering their long-term interests, because journalists are very angry and they want justice.”

Mr Davidson was not available for comment at the time of publication.