A 48-hour strike by journalists at a series of Newsquest titles is starting today – but union hopes for a co-ordinated nationwide walkout appear to have been dashed.

Members of the National Union of Journalists at Brighton and Darlington are striking today, despite pay offers of 2pc made to journalists at some centres.

They will join those who began a three-day stoppage at the Southern Daily Echo in Southampton yesterday, with journalists choosing to extend their industrial action for an extra day because of a row over bonus payments paid to non-strikers last month.

But journalists at many other Newsquest titles across the UK will be working as normal today, including those in Glasgow, who decided yesterday to call off their walkout because of the relaunch of the Sunday Herald as a news magazine this weekend. 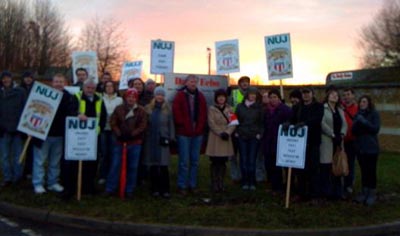 Other centres not taking part in the stoppage include Bradford, Bolton, Warrington, Newport, Worcester, Blackburn and York, although the latter is understood to be holding mandatory chapel meetings during the two days.

The union is calling for management at Newsquest to get round the table for talks on pay and redundancies.

“Our members in the group want their union to be able to sit down with management to discuss a range of issues, including pay and redundancies.

“We did seek the help of conciliation service ACAS but management rebuffed this approach, though they said local centres could engage in ACAS talks if they wished.

“Now is the time for Newsquest to take action and get talks started with the NUJ.”

Newsquest chief executive Paul Davidson had not responded to requests for a comment at the time of publication.

But a statement from Newsquest North-East, which is based in Darlington, said its newspapers would be published as normal despite the strike action by some members of the NUJ.

It said: “At a time when all businesses and organisations are working hard to operate as efficiently and effectively as possible, we have proposed some changes which may result in seven posts, from a department of some 90 people, being made redundant.

“Consultations over these proposed changes have not yet been concluded but all efforts are being made to minimise compulsory redundancies and we therefore believe the union’s actions to be unnecessary and premature.

“The company has offered to increase pay in the North-East editorial department by 2pc in 2011, an increase which in the current financial climate we believe to be fair and reasonable.”