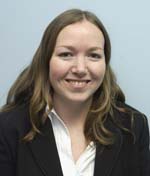 A regional daily reporter helped bring a rapist to justice after more than 25 years after tracking down crucial photographic evidence.

Kevin Moloney went on trial last year charged with raping an elderly woman in her home in 1985 after ‘cold case’ detectives matched his DNA with that recovered at the scene.

However he claimed that the 69-year-old victim had invited him in and consented to sex and the jury was unable to reach a verdict.

Moloney walked free – but Hull Daily Mail court reporter Nicky Harley, left, later uncovered photographic evidence which shattered his defence and forced him to plead guilty before he was due to go on trial a second time.

The Honorary Recorder of Hull and the East Riding, Judge Michael Mettyear, said: “There has been some additional evidence served that tightens up certain aspects. It has certainly had an impact.”

Moloney, who was just 19 when he carried out the terrifying attack, had told the jury Beatrice De Kanter invited him back to her house in Thwaite Street late at night.

He said they had a drink together before having consensual sex on her couch.

The truth was he raped her in her hallway after breaking in through the back door. But, as Mrs De Kanter died in 2001, the prosecution was unable to put forward anyone who could disprove his version of events. 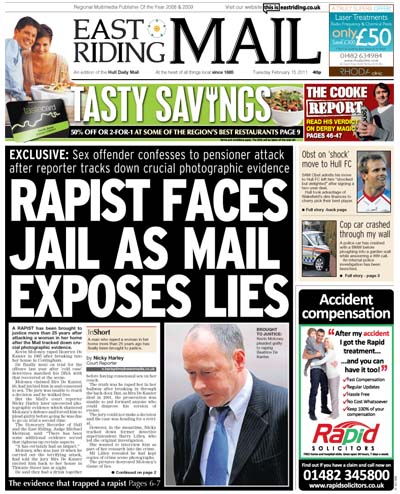 The case was heading for a retrial – but in the meantime, Nicky tracked down former detective superintendent Barry Lilley, who led the original investigation, as part of her research into the crime.

They showed a smashed back door, where he had forced entry to the property.

The pictures also showed Mrs De Kanter, who had been described as a “hoarder”, had piles of newspapers and other rubbish on the couch Moloney claimed they had sex on.

Mr Lilley had not known the originals had been lost and the officers carrying out the latest investigation had no idea Mr Lilley had copies.

But when Nicky explained their importance to Mr Lilley, he handed them over to the current team of investigators.

Faced with the new evidence, Moloney was forced to plead guilty.

His barrister, Paul Genney, told Hull Crown Court: “The lady reporter contacted former detective superintendent Barry Lilley and, as a result of her investigation, other evidence came to light, particularly pictures of the house.”

Mail deputy editor Paul Hartley said: “Nicky is a consummate professional. Thanks to her initiative and determination this man is now facing jail for his crime and the relatives of the victim have finally seen justice done after 25 years.

“It’s an outstanding piece of journalism which once again shows how local newspapers really can make a difference.”

Former Humberside Police Authority chairman Graham Stroud, added: “I think the Mail’s role in this case proves the Press has an important part to play in trying to solve difficult cases, which the police cannot always solve on their own.

“Their combined efforts has resulted in this success.”

Divorced father-of-two Moloney, 44, from Elloughton Road, Brough, had been due to go on trial again for the rape this week but his guilty plea saved the taxpayer the cost of a £100,000 retrial.

He is due to be sentenced next week.