An award-winning press photographer has been given a rare honour to celebrate his ‘outstanding’ skills in a career spanning almost 40 years.

Allan Williamson was made a Freeman of the City of Lichfield by the Worshipful Company of Smiths at a special ceremony, which gives him the unusual privilege of being allowed to drive sheep through the centre of Lichfield.

Allan, pictured below left, was presented with a scroll and commemorative tie by Master of the Worshipful Company of Smiths, Freeman John Haggett, right.

Allan joined the Lichfield Mercury in 1973 and spent 36 years there, becoming the group chief photographer for Central Independent Newspapers, before being made redundant in 2009 and starting a freelance career. 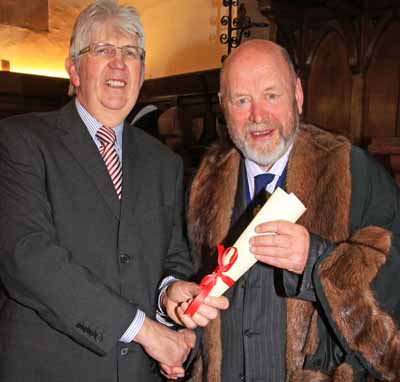 He said: “Lichfield holds a very special place in my heart and it has been a real pleasure and privilege for me to photograph its unfolding history through my camera lens for over 36 years.

“To receive this wonderful honour from such an esteemed and historic Lichfield society, the Worshipful Company of Smiths, for my photography, is very, very special to me and something I will always treasure.”

Allan has won nearly 40 national, regional and local awards during his time as a photographer including four Gold Newspaper Society Awards for Best UK Free Weekly Press Photographer of the Year.

Honorary clerk Michael Watton said: “The Company of Smiths seeks to encourage and recognise craftsmanship by admitting to membership those who are skilled in a craft as judged by their peers – there can be no finer tribute.

“It is true testimony to an outstanding craftsman photographer, whose achievements in local press photography are unlikely ever to be matched.”