A regional daily editor has defended his decision to publish revelations of complaints made about patients’ healthcare, saying it was in the public interest.

The South Wales Evening Post has run a series of articles about 58 allegations made in relation to patient care at hospitals and GP surgeries.

The complaints, set out in a document freely available to reporters at a meting of Abertawe Bro Morgannwg Community Health Council, included claims that a baby boy in Swansea died after being placed in a broken incubator, an Alzheimer’s patient was starved of food and water over 17 days and a 90-year-old woman was left for five days unwashed and in blood-covered clothes.

Health bosses have set up a helpline after the revelations were published in the Evening Post, pictured below, which have since been followed up by the national press. 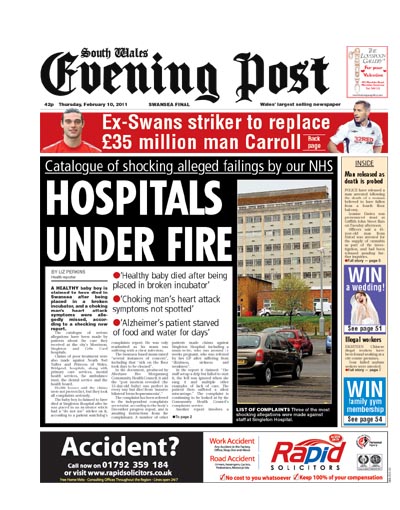 The CHC has said the complaints are unsubstantiated and that many are still being investigated.

But Evening Post editor Spencer Feeney said there was nothing in the story which breached confidentiality and it was important people knew about complaints made against local hospitals.

He said: “Nobody is identified and there would be no way for anybody to identify anybody from it including ourselves.

“This document was freely handed to our health reporter when she attended the community health council meeting.

“I think it is unquestionably a matter of public interest that people should know the level of complaints that are being lodged against our hospitals.”

Carol Lamyman-Davies, director of the Board of Community Health Councils in Wales, said the report was circulated to improve members’ understanding of the work done by the CHC complaints advocacy service.

She said: “I am concerned at the level of detail that appeared in the reports, and which has subsequently been printed by the media, especially as these cases are not proven facts but allegations.

“CHCs work diligently to ensure patient confidentiality and so we apologise if any of the information published may have inadvertently provided details that could identify patients, and are sorry for any distress and upset that that may have caused.”