A regional daily has taken the unusual step of turning its front page into a petition form as it battles to save an RAF base from closure under government defence cuts.

The Eastern Daily Press has launched its ‘Make it Marham’ campaign to maintain RAF Marham in Norfolk as the base for the UK’s Tornado jets.

And the paper’s front page on Saturday was a petition form calling on Prime Minister David Cameron to keep the base, which employs around 5,000 staff.

The government is expected to either base its Tornado fleet solely at Marham or RAF Lossiemouth in Scotland – where the Northern Scot has launched its own campaign to prevent closure – but no decisions are expected until next year. 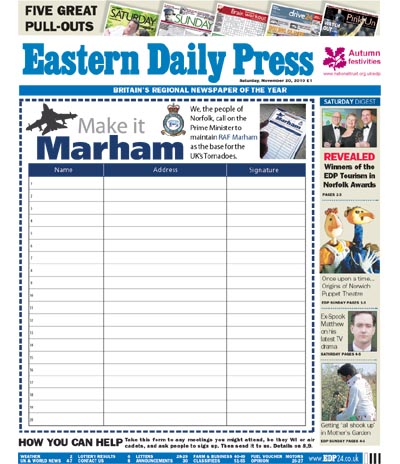 EDP editor Peter Waters wrote in the paper: “You’ll have noticed that there is something different about today’s front page.

“Normally there is a sizeable headline in the Centennial Black typeface and an accompanying story. There is usually a large photograph.

“Today we have published a petition form, something I don’t believe we have done in the 140 year history of the Eastern Daily Press, and certainly not in my 17 year association with the title.

“We have, as we do in Norfolk, ‘dun diff’rent’ because the issue at stake is of the very highest importance – it is the future of the last RAF flying base in the county.”

In his opinion piece, he admitted the people of Scotland had been campaigning strongly for RAF Lossiemouth and said Norfolk had been a little slower ‘out of the blocks’ but the county had now galvanised itself in support.

Peter added: “It will be tough for whichever community loses out. And that community may well be Marham, the west of our county and Norfolk itself, for the ripples of economic hardship spread wide.

“But however this campaign ends, in success or defeat, let it not be said that we didn’t give it our best try.”