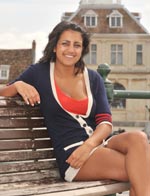 An editor has defended a student columnist whose booze-fuelled tales of university life have sparked a furious debate among readers.

20-year-old Lucy Ruthnum, left, has a column published every Friday in the bi-weekly Lynn News but her controversial views have not proved popular with some readers.

Some of them have taken her to task over her partying and drinking, telling her to knuckle down to her degree in English Literature instead.

But editor Jon Buss said Lucy, who was recruited for the column after a successful work experience placement, was just telling the realities of student life at her university in the South-East of England.

He said: “She’s a natural journalist. She hasn’t even started any kind of formal training but she was bringing-in page lead stories from the start.

“And when I asked her to write candidly about her student life, well it just all came out. She gets criticised by the boring brigade but she’s telling the readers what’s really going on.

“This is the reality of student life. Sometimes you just know she’s propping up her eyes with matchsticks. She brings the chaotic side of being a student to life. And she describes hangovers in every detail.”

In one of her pieces she wrote: “After a hectic night I wound-up getting home at 5am. After an hour’s sleep I dragged myself out of bed for the longest day ever.

“Thank God for university. If I’d never been I wouldn’t be an expert in sleeping for an hour and waking-up sober and raring to go.”

And an article she wrote about a transgendered lecturer was criticised by some readers who accused her of making fun of him – a charge denied by the paper.

Reader Christine Toft, in a letter published in the paper, said: “Lucy obviously found this (transgendered) person a figure of fun and to put this in the press is unforgivable.

“Her constant references to her drinking habits and her avoidance of any lectures that interrupt her social life are very interesting, especially at a time of cutbacks and the current climate of binge-drinking.”

But she has been defended by some readers, with 70-year-old Alan Mudge writing to the paper saying: “Lucy, your time as a student will soon pass, so work hard for your degree but enjoy your youth and live life to the full.

“You party, party on, kid. Let the killjoys mutter and moan. They don’t know what they’re missing.”