It was from high up on Clitheroe’s Norman Keep that I spotted the most colourful newsagents I’ve ever seen – and decided there and then to spread the word. 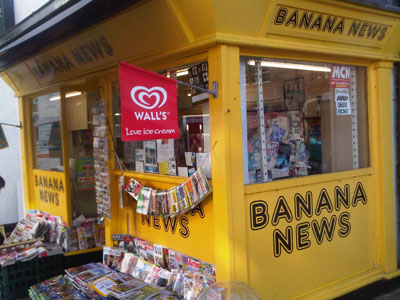 Yes, Lynn Melvin and Keith Leeming, my old mates in circulation: I think you ought to try out a ‘Pomegranates and Lemon Top News and General Store’ in Redcar, or a ‘Pineapple and Hairy Pork Scratchings Newsagents’ in Rubery, with dazzling fascia boards that become known and loved from miles around.

Certainly as I strolled down the hillock and across Castle Street towards the bright-yellow Banana News shop, I felt with confidence that my weekly thirst for extraordinary local news would be satiated.

I was not disappointed; so peculiar was The Clitheroe Advertiser and Times’ splash that I commandeered a stool at a nearby hostelry and read the whole story immediately, pausing only to sip a pint of obligatory ale.

‘It’s all lies and ugly rumours!’ begged the headline, the weathered face of a restaurateur pictured alongside his venue “which some of the rumours have focussed on”, according to the picture caption. 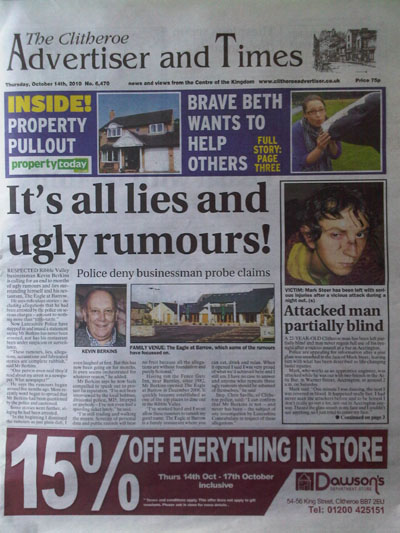 What the blazes is this all about, I pondered, plunging into the intro: “Respected Ribble Valley businessman Kevin Berkins is calling for an end to months of ugly rumours and lies surrounding himself and his restaurant, The Eagle at Barrow.”

It was a really good read on the basis of nothing, a tale of Chinese-whisper style tittle-tattle that included local bobbies, divisional police enquiries, arrests, cautions, MI5 and Interpol.

All “complete rubbish” according to Mr Berkins, whose denials of sinister goings-on were backed up with official quotes from the local police chief: “I can confirm that Mr Berkins is not – and never has been – the subject of any investigation by Lancashire Constabulary in respect of these allegations.”

Not one detail of the scandal mongering was repeated, which surely means that even if the hearsay hadn’t come their way before, the whole of Clitheroe and surrounding villages would now be wondering what was behind the inaccurate stories of goings on at The Eagle at Barrow.

All of which was a great start for this 14th October edition, scoring ten out of ten for a splash that was undoubtedly the talk of the town in all local pubs that weekend.

There were plenty of other community news and faces known by everyone inside this 56-page weekly, including:

There were numerous crime reports and a smattering of courts and council coverage as well, along with a three-page ‘News from the Villages’ section, itself containing as many as 60 community stories.

For a cover price of 75p, there were a total of 128 reads on 21 news pages, with another 27 reports on four sports pages and a 12-page Property Today pull-out.

So it was an impressed tick from me for Times’ editor Roy Prenton and team. Yes, a recent Dyson at Large blog was a little troubled with production errors at the nearby Nelson Leader that Prenton also edits.

But there were no such blunders here in Clitheroe, where readers were served with a well thought-out package and a splash to keep the farmers’ wives’ chins wagging for days.