A weekly newspaper has hit back at a company that blamed “bad press” for its liquidation.

The Northamptonshire Telegraph has criticised M&B Promotions over the “ludicrous” claim after covering the cancellation of a number of planned comedy and music concerts the firm had organised at Kettering’s Wicksteed Park.

The Telegraph had broken the news that five out of six comedians at a planned ‘Comedy in the Park’ event would not be appearing on the bill after M&B failed to do so, prior to the company and ticketing firm Simple Ticketing Ltd going bust last week.

Reports about the companies are now being sent to the National Fraud Intelligence Bureau for assessment after ticket holders were left unable to claim back their lost outgoings. 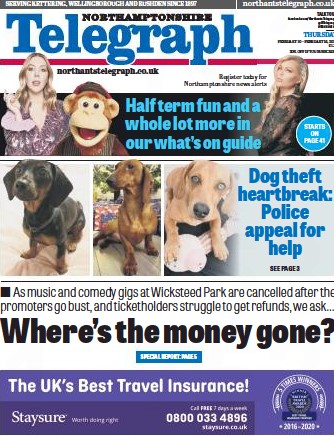 The Telegraph splashed on the story last week

In a bizarre twist, an M&B spokesperson claimed to the Telegraph “bad press” about the planned comedy event had a negative impact on sales for their music shows – even though organisers had claimed tickets for a show by singer Craig David were “flying out of the door” when they went on sale last year.

Telegraph senior reporter Sam Wildman told HTFP: “M&B Promotions’ suggestion that their downfall was partly down to bad press is so ludicrous it would be laughable, had thousands of people not lost their hard-earned cash.

“There seems to be a culture of blaming the media for everything at the minute rather than admitting your own mistakes. They did get bad press, but only because of the appalling way they handled the situation.

“We had to break the news to our readers that five of the six comedians on the bill for one event wouldn’t be there because M&B Promotions hadn’t told them.”

The Telegraph subsequently ran a piece on M&B’s decision not to offer refunds for rescheduled events after hundreds of ticket holders contacted the newspaper to “rightly voice their anger”.

Sam added: “And we wouldn’t have had to run a further piece on how the firm was ignoring people if they had the decency to reply to them.

“Firms like these seem to forget we are not here to do their PR for them. We’re here to stand up for our readers.

“You only get bad press when you’ve done something wrong.”

M&B Promotions said in its statement to the Telegraph: “Problems started when we were forced to reschedule the larger outdoor shows due to uncertainty with covid in early 2021.

“We took the decision to reschedule the events to a safer date in 2022 but soon found logistical problems with some of the confirmed acts not being able to commit to the new dates.

“Because of this we left all of the Comedy in the Park shows off sale whilst we worked on replacing the line ups. Unfortunately the bad press had a negative effect on the sales of our music shows which were scheduled to run side by side with the comedy shows.

“Due to the financial implications surrounding the large outdoor shows it just isn’t viable to run one show without the other. This along with the financial setbacks the pandemic has caused has left us in a situation we didn’t want or expect to be in.”