Footballer deemed to be rapist axed after weekly’s plea 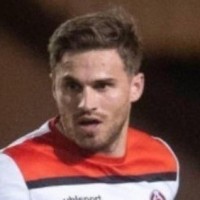 A football club has torn up the contract of a player who was ruled to be a rapist following a weekly newspaper’s plea.

Raith Rovers have acted ahe Fife Free Press launched a petition calling for them to rescind their decision to sign David Goodwillie.

Goodwillie, pictured, was ruled to be a rapist by a judge in a 2017 civil case and ordered to pay damages over an incident that happened six years earlier.

Kirkcaldy-based Rovers initially defended his signing, claiming they acknowledge “the gravity of what happened” but adding it was “first and foremost” made a football-related decision to take him on.

But the club have now admitted they “got it wrong”, saying he will not be selected to play and talks will begin about his contract.

In a comment piece accompanying the petition’s launch, Free Press editor Allan Crow wrote: “Goodwillie, a man ruled to be a rapist in a civil court case, has absolutely no place at a club which has worked so hard to open its doors to people across the community.

“To see good Rovers’ people walk away is heartbreaking. They deserve better.

“Raith Rovers must do better – and that means not just terminating Goodwillie’s contract, but understanding why his signing caused such fury and offence.

“Rovers has always been a family club. But it cannot continue to call itself a family club while expecting fans to cheer for a man ruled to be a rapist wearing its colours.”

Nick Mitchell, editor of the FFP’s JPIMedia sister title NationalWorld, has also revealed he has withdrawn his lifelong support for the club over the issue.

In an editorial, he wrote: “I’m sad that a Saturday afternoon ritual of going to games with my Dad is no more. I’m sad that the club has become a rightful target of the harshest criticism, on a national stage.

“I’m sad that many families with young fans will now choose other clubs over Raith.

“Some supporters have already said it won’t affect their stance, and that we’re all just virtue-signalling snowflakes.

“I cannot continue to support a club that shows it has no moral integrity, that chooses to wilfully alienate its own fanbase and torch decades of loyalty in one fell swoop.”