The UK’s most northerly newspaper has celebrated 150 years in print with a special edition on Friday.

The first ever edition of the Shetland Times was published on 17 June 1872 and the 150th anniversary edition hit the streets on exactly the same date this year.

The sesquicentennnial edition was accompanied by a free colour magazine marking 150 “moments” – stories that have dominated the news in the islands as well as others that show the lighter side of island life. 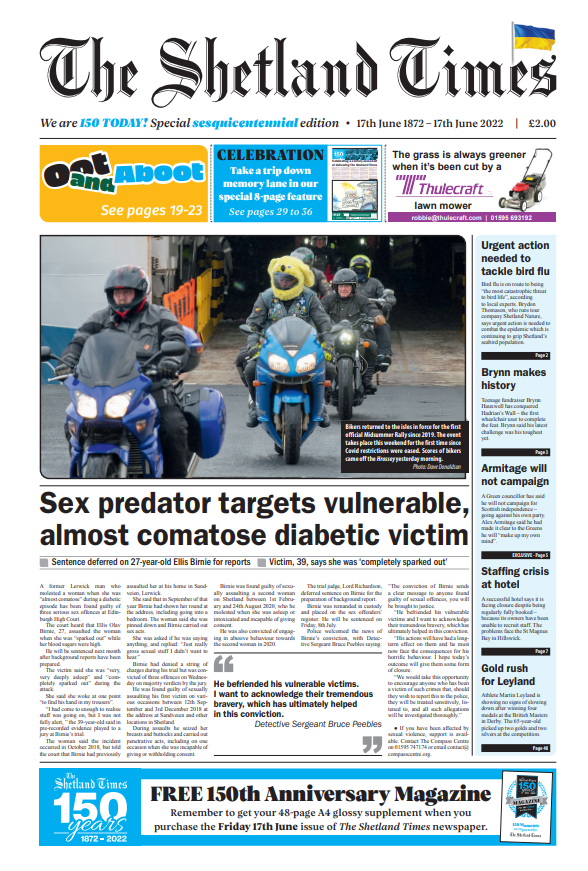 First published as the Zetland Times before changing its name shortly afterwards, the Times now claims to be the oldest fully-independently-owned local newspaper in Scotland printed on its own newspaper press.

The magazine supplement aimed to provide readers with a fresh insight into how Shetland Times journalists reported the big stories affecting the islands.

But there are happier stories too, such as coverage of the Island Games when they came to Shetland in 2005 and the opening of the Sullom Voe oil terminal in 1981 – which heralded a dramatic transformation in Shetland’s economy.

Editor Alistair Munro said: “Local journalism can be a challenging career, particularly during the last two years since the start of the pandemic, but it continues to be a privilege to work in such a supportive and lively community.

“Shetland may be isolated geographically, but it has always been an extremely busy news patch, with a lively social scene.

“There has been plenty to write about in sport as well, much of which we rely on dedicated contributors, and our column-writers keep us informed from the different patches of the isles.”

“Since 1872, The Shetland Times has been at the forefront of local news. Our 150th magazine highlights some of the moments that have kept generations of readers informed of news and events.”