A local democracy reporter sailed to Holland and back to investigate P&O in the wake of the ferry company’s sackings scandal.

Joe Gerrard, who works for the Hull Daily Mail and its Hull Live sister site under the BBC scheme, was among the first passengers to use the firm’s Hull to Rotterdam service after it fired 800 staff without notice and replaced them with agency workers.

Joe undertook the voyage on The Pride of Hull, which lost 82 crew members in the cuts, and spoke to newly-installed staff and some of the few passengers aboard about their experience.

He described the atmosphere onboard as “very strange” and the Mail dubbed the ferry a “prison ship” when it splashed on his investigation on Tuesday. 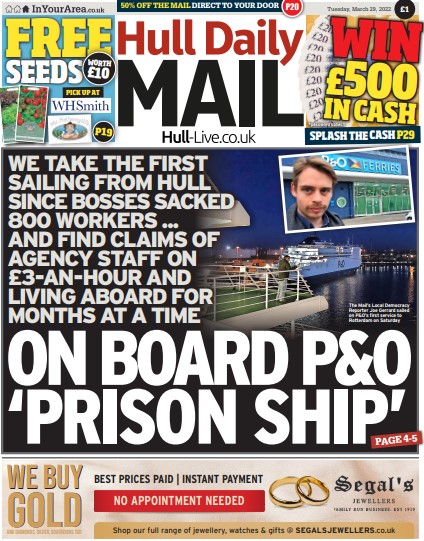 Speaking to HTFP, Joe said: “This was a great story to be involved with as a local democracy reporter.

“The P&O sackings and their impact are very much in the public interest and LDRs, as public interest journalists, can and should be covering it and other stories like it.

“There are serious questions over how this whole issue was handled by P&O and the Government’s response.

“It’s straightforward to cover those stories from the office but to get a real feel for what was happening at P&O, how agency staff work, what the impact has been on passengers.”

During his voyage, Joe discussed working conditions with staff, who earn little more than £3 an hour and are “more likely to be BAME and non-European” in lower level positions.

Joe added he felt undertaking the journey was “the right thing to do”.

He told HTFP: “The atmosphere on board was very strange, the bars and restaurants were very quiet.

“Although the ship was clean, orderly and well maintained and the crew friendly and professional, it felt as though the life had been sucked out of it.

“What the future holds for the crews a, the routes and the ferries is still unclear but we’ll continue to monitor and report on it throughout.

“The ferries in Hull are a big part of the economy and many of the sacked crews live here.”

Jamie Macaskill, editor of the Mail and Hull Live, said: “It was important we were on that first ferry out of Hull after the sackings to gauge the impact it has had on the staff and passengers.

“The P&O ferries from Hull are important to this city and our strong cultural and economic links to Europe.

“We want to see them survive but as Joe’s reports show, the future looks uncertain.

“Joe’s journey allowed him to unearth new details about the working conditions of those under P&O’s agency model and it’s not impressive. The more light we can shed on this subject the better.”